Molly and I had our second weekend of USDAA agility trialing.  This particular trial was outdoors with absolutely no shade and the temperatures were up above 85 degrees.  Lesson learned: read premiums to find out if a show is indoors or outdoors!  (We trial at this venue often, and the ring has always been indoors...until now!)

Out of complete curiosity, I asked a judge to measure Molly.  She cannot have her final measurement for another 3 days and we have to find a Certified Measuring Judge, but I wanted to see what she would measure.  20 1/4 inch.  Hm.  My dog shrunk again!

Donna and I went all out to beat the heat.  We of course had a canopy with screening to keep the heat out.  We brought a baby pool along with three huge jugs of water so that the dogs would have a big water bowl and wading area right inside of our "camp".  Luna had a cooling vest and portable fan.  But it was still TOO HOT.

Gamblers was first, and our first time playing this game.  We had to earn 13 points in the "opening" and then complete all four obstacles in the "Joker" without me crossing the dotted line.
Molly stuck with my plan fairly well with a few sniffing voyages.  We did some jumps, the A-frame twice and the tunnel underneath.  It is all a blur, but I remember trying to get her on the teeter but she skipped it and zoomed off to do something else.  Then the buzzer sounded.  I collected her, but it took some time.  She took the first jump in the Joker and went into the tunnel, but by the time we were back together and going for the number 3 jump, we were out of time.  Ah well. 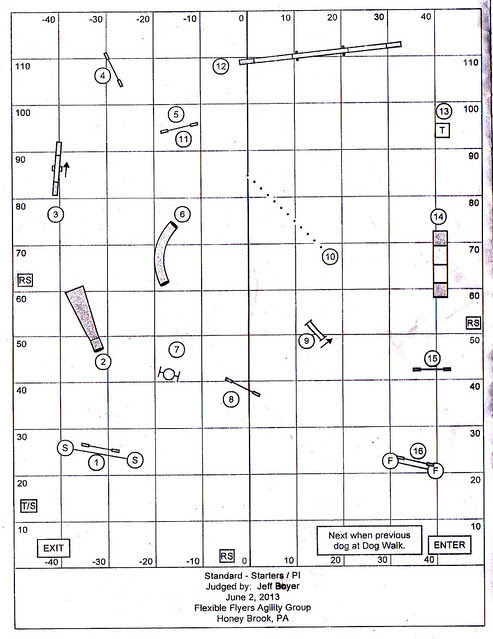 Next was Standard.  I hosed Molly off with cold water before our run.  She normally hates being sprayed, but she stood totally still and let me spray as much water on her as I wanted.  I KNOW she was hot!
The Standard run felt like a total trainwreck to me, but our only faults were time faults.  Molly launched out of the course to visit: two different ring crew members, a photographer, and the ring stewards.  And I think there was a random sniffing offshoot as well.  It was hot and I had to do twice as much work to keep her with me and NOT visiting other people!
Ah well.

Relay Pairs was next.  This game was absolutely new to me, although CPE's Colors game is sort of like it. (the mini-course similarity)  In Relay Pairs, you run with a team member.  One person runs the "Circle" course, and one person runs the "Square" course.  You run with a baton on your turn, and when your course is completed, you pass the baton off to your team member and then they may run their course.  Whichever team completes the course the quickest wins, and qualifying scores are earned for teams who complete their courses under the "qualifying time".
I think that this game is pretty fun, but on the other hand it makes me completely nervous.  I don't like being responsible for somebody else's Q.  At all.  Our partner was a bloodhound mix named Tigger, and Tigger's owner and I both exchanged, "I apologize for whatever my dog does." and laughed before we went into the ring.  Tigger has a habit of going into tunnels and rolling around, so she took the circle course, with less tunnels.  Molly and I did the square course.
Tigger was DONE with the heat, and she alternately ran and rolled around in the grass.  Our buzzer went off before the baton was handed to me.  Molly and I still ran our course and it went relatively well until the end.  Instead of taking the end tunnel Molly wanted to go say hi to Tigger and her handler (A person AND dog in the ring WITH US!  How cool!)  I honestly found it refreshing to not feel a lot of pressure from our partner, and to just be able to laugh off our crazy dogs on such a hot day when no one really felt like running anyway. 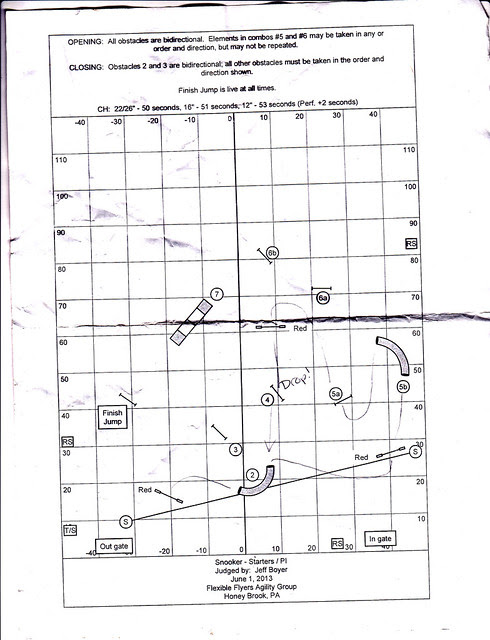 The Filthy Snooker.  People gush about how they love Snooker, but I haven't reached that point yet.  MAYBE if I ever am able to make it to the closing sequence, I will feel that way.  As of yet, Molly and I cannot get past the opening.  The rules are the same as CPE as far as I can see, except there are only three red jumps instead of four.   Red jump, obstacle, red jump, obstacles, red jump, obstacle.  2-7.
I drew our path on the map to the right (it can be enlarged.)  We almost made it to the closing, but Molly took the jump bar down on our last obstacle, so we got whistled off.   Sigh.  Stupid whistle.  Stupid Snooker.


I went home sun burnt, full of defeat, unhappy with USDAA's strict rules and tricky courses, but still somehow wanting to go back Sunday.  And go back I did.

Today was breezy and much cooler.  Sitting beneath the canopy was absolutely pleasant and comfortable.  The dogs seemed much more comfortable, which is a big deal!  Our Standard course was the second thing of the day, when the temperature was still nice.

Standard
Molly qualified on this course and she ran really well for me here.  She gives me JUST enough good performance to want to keep going, enough to give me hope that she is improving.  Since Molly was behaving, my brain had to STOP behaving.  Just before we headed into the ring, a migraine aura started up on me, so that I could not see properly.  We did well, though, and the only "excursion" from Molly was skipping a weave pole.  I restarted her and we finished the rest of the course without any nonsense.
It felt great to run a course nicely with my girl!

Only one more course to go after that, Jumpers.  But first the ring was given over to Steeplechase and Performance Speed Jumping tournaments.  The cool breezy day and shade made watching all of the dogs and their handlers really enjoyable.  My favorite dog and handler team even made it into the finals, but I did not see if they ended up winning.  Such a difference a nice breeze can make! 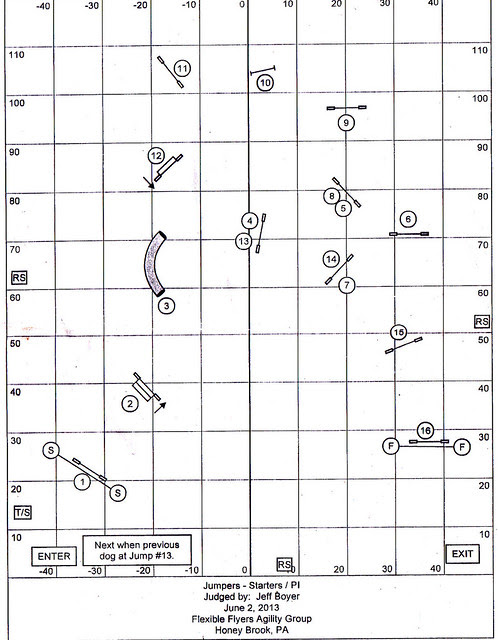 Jumpers at last.  I was concerned about this course, it seemed a little tricky to me.  A little too tricky for Molly and I.  In fact, most of USDAA, if not all, seems too tricky for where Molly and I are at.  I don't even remember when it happened, but Molly took a bar.  And then I stopped caring about the course.  In USDAA a dropped bar is an NQ, beginner level or not.  I was hot and struggling with the tight handling, Molly was racing around and doing her thing.  We did two more back jumps and then skipped a jump somewhere in the end sequence.  Oh well.

On the subject of Dropped Bars, that is not Molly's normal issue.  It does concern me.  I know that at home when we practice in grass, she will knock bars more often than she does in agility class.  I also know that she was jumping 22" instead of her normal in-class 20".  In CPE, Molly measured just below 20", so she is allowed to jump 16".  And why not?  Our next two trials (in July) I have her entered in the 16" height class.  I do not understand what the point of too-high jump heights is, not even a little bit.

Outdoor trials, especially outdoor trials in the heat, are not something that we are going to be doing again.  And as for USDAA, I am not so sure about that either.

Posted by dogbird daily at 3:29 PM