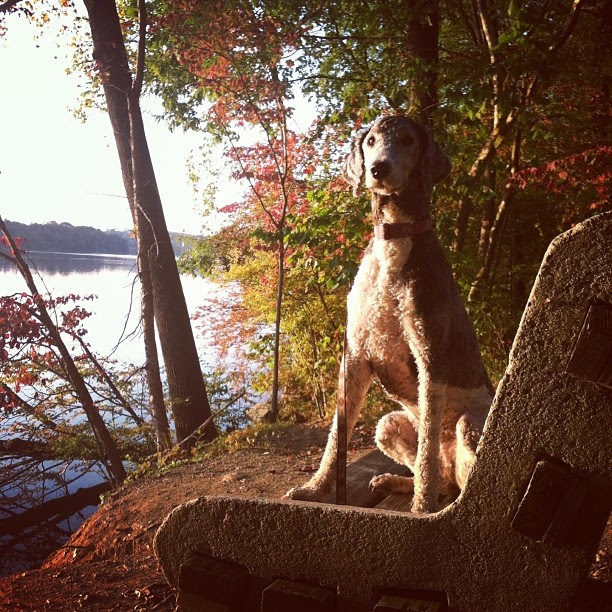 Perri and I went for a little hike at Marsh Creek State Park today.   We had a great time walking around (found two geocaches!)  The last time we were at Marsh Creek was the day that I brought Perri home with me.  How different she is now!
On that occasion she screamed bloody murder in her crate and vomited all over the place.  And then screamed some more.

This time around, she was completely quiet and at ease in her crate.  I never forget what a huge accomplishment that is for her!

In other ways, however, she has not improved.   She barked at a woman with a large hat on.  She was worried about the kayaks and motorboats out on the lake to the point where she preferred to stretch herself out to drink the lakewater instead of actually getting in the lake.   On the trail she was doing some slinking and intense sniffing alternating with walking and then stopping short to stare at something.  See, Perri is used to hiking or walking with either Ein or Molly or both.   They cushion her, they make her feel safe, and that is a good thing.   But I think that aiming for Perri to walk alone with me at least once or twice a week would not be a bad goal.

I keep saying that I am going to teach her the LAT (Look at That!) game from Leslie McDevitt's Control Unleashed book, and I really do need to get to that.   I think it could help Perri a whole lot when she is stressing.


The worrying continued in the lobby of our training center before retrieve class.  We had to wait along with all of the Rude and Noisy puppies since puppy class and retrieve class are held at the same time (obviously in different rooms.)   This was unnerving for Perri and she barked at two of the puppies.  If she wasn't barking she had a troubled and worried expression on her face.

I told our instructor that Perri was having some confidence issues with gripping on the dumbbell and that we had not progressed quite as far as our homework outlined.  She said that that is okay and reminded us that we are simply given the outline and to work at our own pace.  It's not a race!

We practiced having our dog at our left side while we are standing and then putting the dumbbell in front of her and saying "Take It" and waiting for the dog to choose to bite the dumbbell.   Perri broke out of her shell and showed me the dog that is underneath all of that solemn, I love it when that happens.  By the end of class she was stepping out, grabbing the dumbbell and holding it! (And lowering it to the ground and leaving it there to free her mouth up for her treat.)
We also worked on fronts and Perri was coming in nice and straight and I was so proud of her.  She was VERY excited to do fronts, her tail was up and she was so confident.   As though she was thinking, "Something I don't have to figure out, I know this stuff!"  I couldn't help but wonder at why she blew off fronting at the obedience trial to run behind me, but of course the answer to that is: stress.
Posted by dogbird daily at 6:46 PM