Time to write about this past weekend's CPE trial!  We did a whopping 3 days altogether, with each dog doing a few entries per day.

We started with Friday.  I was not originally entered in Friday, but was able to score a half day off of work in exchange for working a longer shift earlier in the week.  I wanted to do Friday because it was the only day offering Wildcard, and we are still chasing that fifth Wildcard Q.  It's starting to get old!

I was late arriving, barely enough time to set up my crating area.  My head was still fresh from the road when I walked the Fullhouse course and crammed in a plan for my two different dogs.
I had no time to walk Perri.  Nearly a two hour drive and I walked her into the building with no potty break, took off my winter jacket and threw it on the ground ringside, and went into the ring and nailed it with 31 points (we needed 25) for Perri's first Level 3 Fullhouse Q.
If only things went so well with Molly.  I started her on the same course as I did with Perri but she came flying out of a tunnel wide so I tried a distance send on the Aframe....that caused her to halt her striding on top for me to catch up.  She jumped the Aframe.  We fumbled through the rest of the course and I got her on the dogwalk for practice...she also jumped off of that.  We NQd Fullhouse for the first time in a long time with 17 points.   Yuck.

Jackpot was next, just Molly this time.  It was traditional, which I love!  Distance challenges are always fun with Molly.   She was pretty subdued and we did an awesome 37 points in the opening but the gamble had weave poles in it and we just aren't strong enough with our trial weaves to handle that yet.


Wildcard last , just Molly again.  Things were going just great, we got through all the hard parts and then I forgot to do an extra "out!" push onto an out-of-the-way jump and Molly blew past it and took the straight tunnel.   I feel awful for trying to yell her off of an off course but I slipped.  Hard habit to break!   And we are still needing that last Wildcard Q.   Wildcard is my least favorite of all CPE games.

Saturday we rolled right into the two rounds of Standard.  We NQd the first one, and Qd the second one.  For the first one I did a lead out with hopes to avoid the pitbull runway and flyoff on the dog walk but....off she went.  If we had not already NQd I never would have tried the cross at the end of the Aframe but I wanted to experiment (we faulted the Frame also.)

The second round of Standard went better for us, but that dog walk was close!

Molly was done for the day after those two Standard rounds.
Following that was Perri having a rare all NQ day.
Snooker Level 3 she got poodle-crazy on me.   She played along with my plan but I had to be more still than usual because she was on the edge of pouncey and I was hearing growls.  On the closing we had a straight line of jump - tire - jump and she just ran it so flat out fast and did not collect whatsoever for the 24" tire she had to clear.  She ran under it and took the next jump as an off course.  Oops.
Jumpers Level 4 we had a beautiful run but I had a brain short circuit and sent her to the entirely wrong end of the tunnel.  Bad handler!!   I did not "fix it" because my dog did just what I told her to do.  We continued our beautiful run as though nothing had happened to the finish.  I was happy to see speed and cooperation from Perri after her silliness in Snooker.
We had a second round of Jumpers Level 4 and Perri took a rare jump bar down off of the double jump on the second obstacle.  This was terrifying.   There was something after her on the course!  It bit her foot , it slammed behind her and she had to make sure that it wasn't going to eat her and kill her the rest of her run.  We NQd for time faults because Perri was obsessed with the horror that was on her heels.

Sunday I was hoping that things would look up a bit!  I was thrilled to have gotten another Standard Q on Molly on Saturday but the whole day didn't have that rockstar feeling to it, that's for sure!
We started again with Fullhouse.  Beautiful fast runs from both girls, with Perri earning 34 points and Molly earning 38 points.

Next was Standard.  Of course, mine and Molly's best Standard run from the weekend was not on video!  We had a true to the bottom dogwalk contact...we had a true clean run...a great time.  I actually got chills when I was putting Molly's leash back on, that was how proud I felt right then!  This means we need only three more Standard Qs for our C-ATCH!

Jackpot was next.  I did something naughty with Jackpot.  Since I was staying with my parents for the weekend, away from home, I had Ein with me.  And Ein was getting pretty bored hanging around a three day agility trial....so...I entered him in Jackpot!  He was so excited ringside, bursting with joy!  He was so excited in the ring!  The jump wings weirded him out and I bumbled the jump wrap on the double jump (I'm used to my big strided dogs landing out much farther than little Ein coming over a 4" jump!)

Ein qualified this run with 41 points and finished Level 1 Specialist in doing so.  Ein CSL1!  I have missed doing agility runs with Ein and it was really fun to have him be able to be involved with the agility trial. 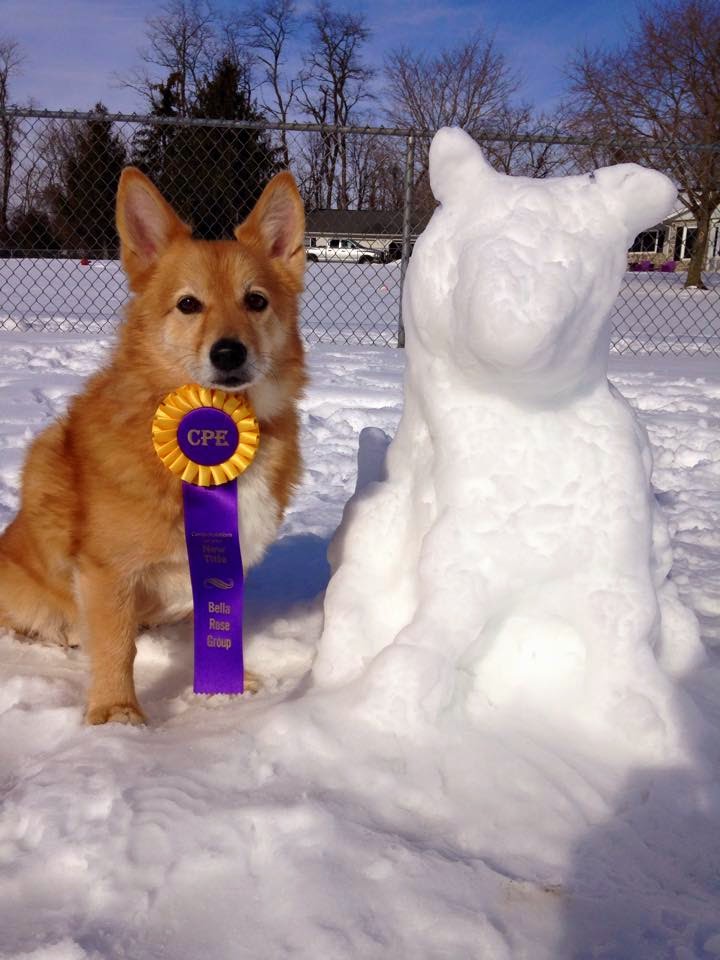 Perri also got a Jackpot Q with 46 points and a lovely fast run.  But Ein was totally the star of my Jackpot show!

Our last run of the weekend was Perri finishing Colors Level 3.  We had a super fast run, but the final line was a literal zig zag of jumps that Perri had a very hard time collecting for.  We got through the run clean but it was really a bit of nonsense.  Many of the big dogs, even those with good handlers, had a hard time collecting and reading their handler's cross to get over the next jump in time.  Even many small dogs were challenged here.  Perri and I finished the course under 20 seconds but we were definitely not super smooth through the zigzag (I wanted to do rear crosses and that is most certainly not Perri's Thing.)

Long weekend.  Fun weekend.  Other things are that I won a 10 dollar gas gift card and a large box of Blue Dog Bakery dog treats in the volunteer raffle.  Saturday afternoon into Sunday morning we had a mini blizzard that turned into freezing rain.  Driving the little blue car was horrendous and tedious but we made it through safely.  All more beautiful memories in our Big Journey.

And 3 Standard Qs and one Wildcard Q to go....until C-ATCH Molly Moo!
Posted by dogbird daily at 6:35 PM