Perri and I (and Ein!) went to the Poodle Club of America National Specialty this past weekend through Monday and Tuesday.  It was, of course, my first time there.  Ein came along because: I would miss him, he would miss me, and Perri is much more relaxed when she has another of my dogs with her.  Everybody wins when the corgi is in attendance!

We arrived on Friday at a small cabin that I rented at a local campground.  There were hotels more local to the show site but a cabin was more my style.  There were Tracking Tests being held on Friday, but we did our travelling and settling in that day. 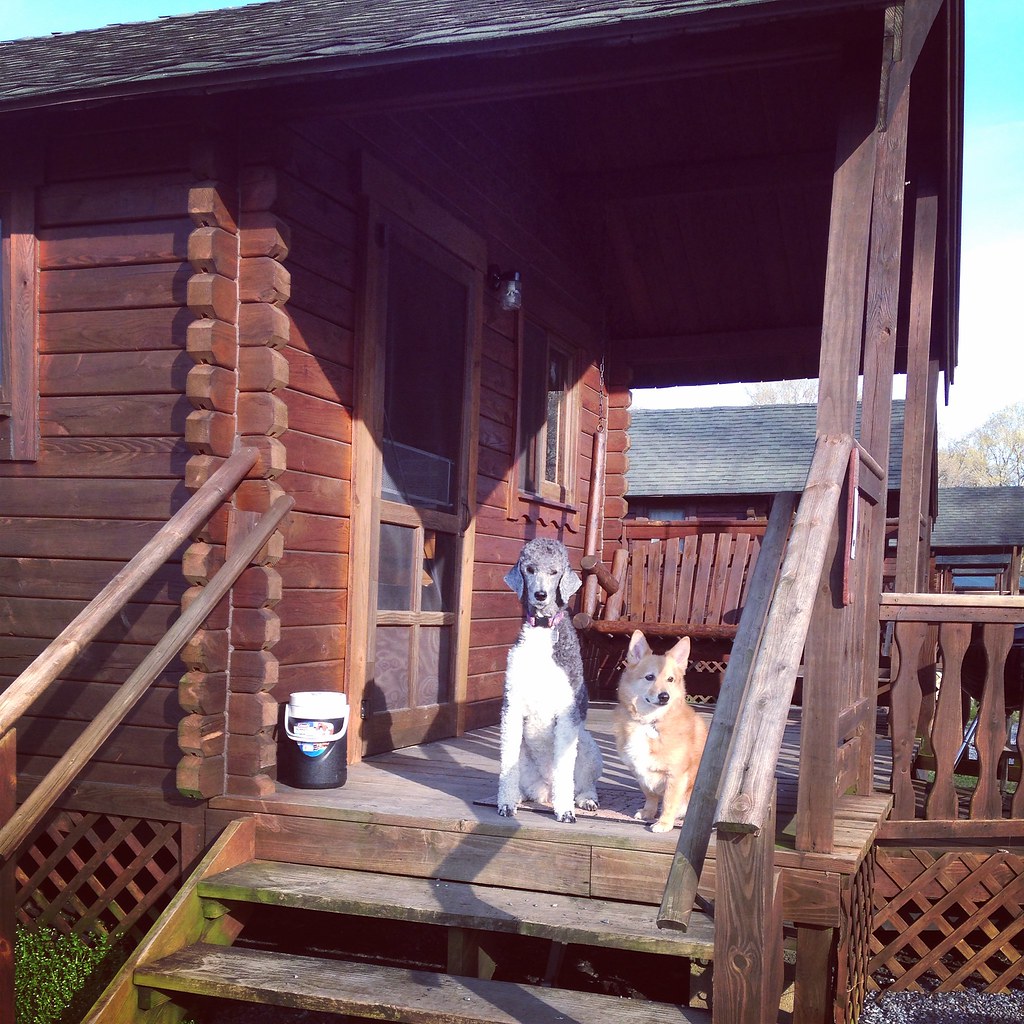 Saturday the Hunt Tests were being held.  Originally I was planning on going to see those, but since there would be PCA Working Tests on Sunday, and they are similar enough for my eyes, I decided to play tourist.  I went solo to Assateague Island to see the wild ponies, and in the evening the dogs and I went to the Ocean City Boardwalk. 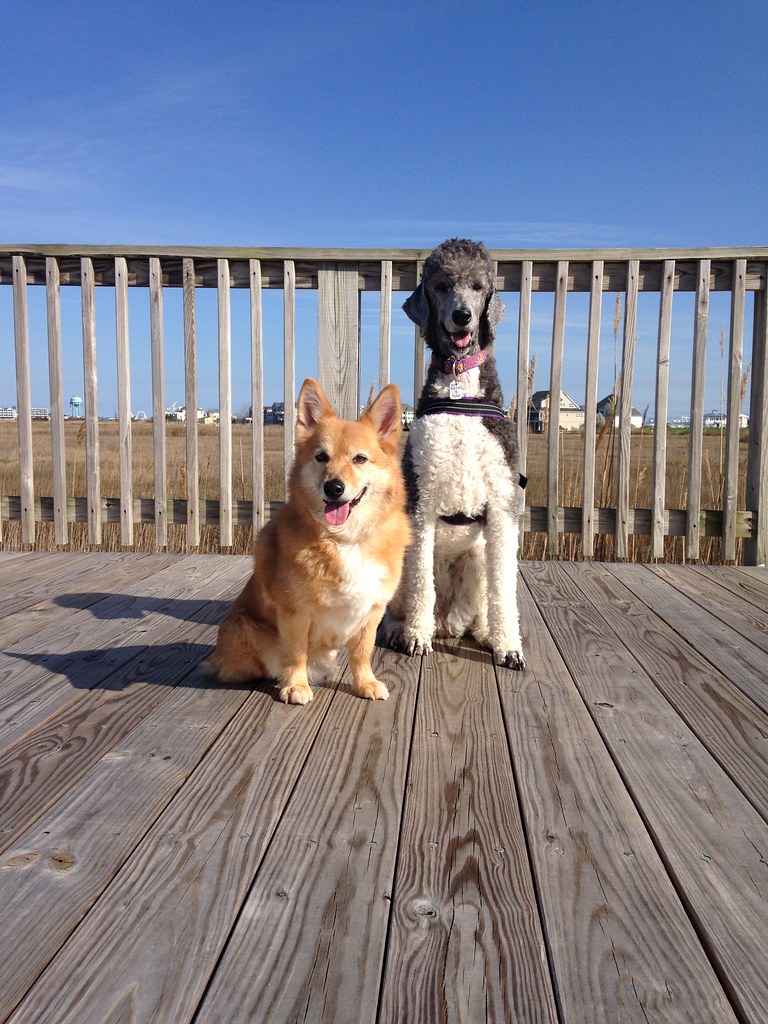 Sunday Perri and I drove to Anatidae Farm to watch the Working Tests and to participate in the "Field Aptitude Test".  We arrived when the poodles were doing land retrieves.  It was very windy and a bit chilly but it was bright and sunny at the same time and a good time to watch the test being conducted.  The Working Certificate Excellent Tests had the dogs retrieving two ducks, and the Working Certificate Tests only one.  There were blinds set up, two out in the field and one close by for the dog waiting for his test to start.  The workers out in the field blind would make a duck call, shoot a gun blank and then slingshot a dead duck out into the field.  For the WCX dogs, this would be done twice.  The dog then had to retrieve cleanly and come to heel position and give the duck up.  At least, that is my very uneducated summary of what I witnessed! 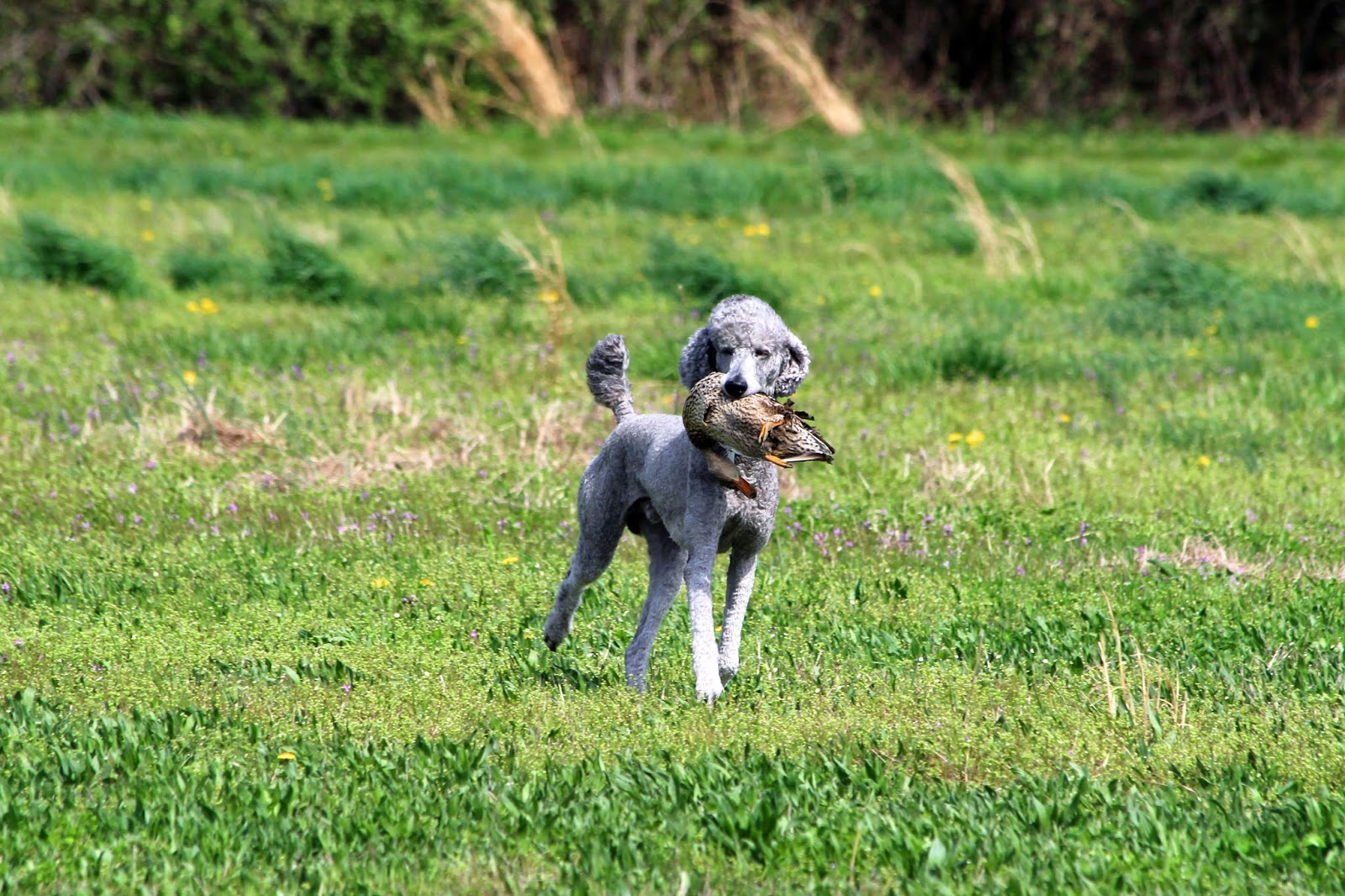 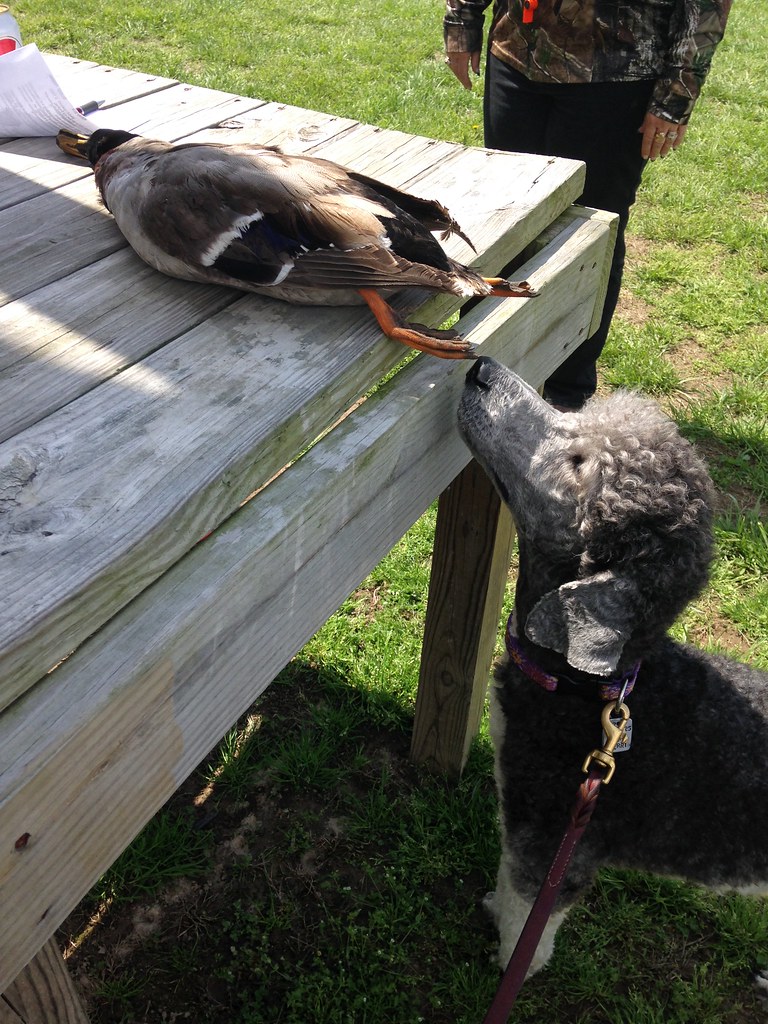 After the land retrieving, there was a break for lunch and the Field Aptitude Test began.  There were nearly 15 dogs signed up, and Perri was one of them.  It was interesting to see the dogs' reactions.
When it was Perri's turn she was completely uninterested in the plastic bumper that we drug around.  When it came to the duck she was definitely interested!  Perri was snuffling in the duck and sniffing it all over, I threw it a few times and she ran to it each time and even grabbed the neck.  I am of course going in way too many directions right now with not enough time, field trialing and training are low on the checklist.  But it was a free test and it was fun to see Perri's reaction.  What amazed me the most is that Perri was not gun shy.  She noticed the gun shots, but they did not stress her out in the slightest.  It is rather incredible to me that a dog who is afraid of her own reflection in my sliding glass door isn't afraid of loud gun shots, but there you go... 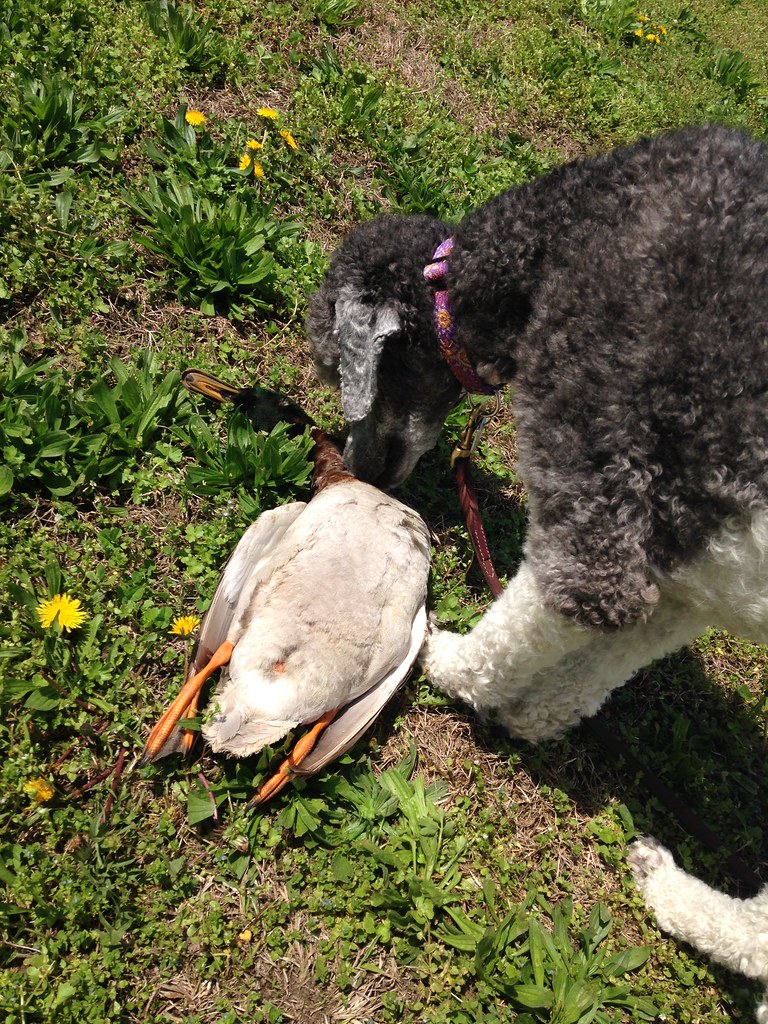 After the Aptitude Testing and lunch break, we all moved our chairs to the lakeside and watched the same process of testing being performed, but this time the ducks were launched into the lake and the poodles had to swim and retrieve.  My favorite was the standard poodle who retrieved his duck, went to shore and returned the duck to his owner by running along the lakeside rather than swimming!   My other favorite was a very small miniature poodle who retrieved all of the ducks - and they were almost as big as the dog.  Go Mini! 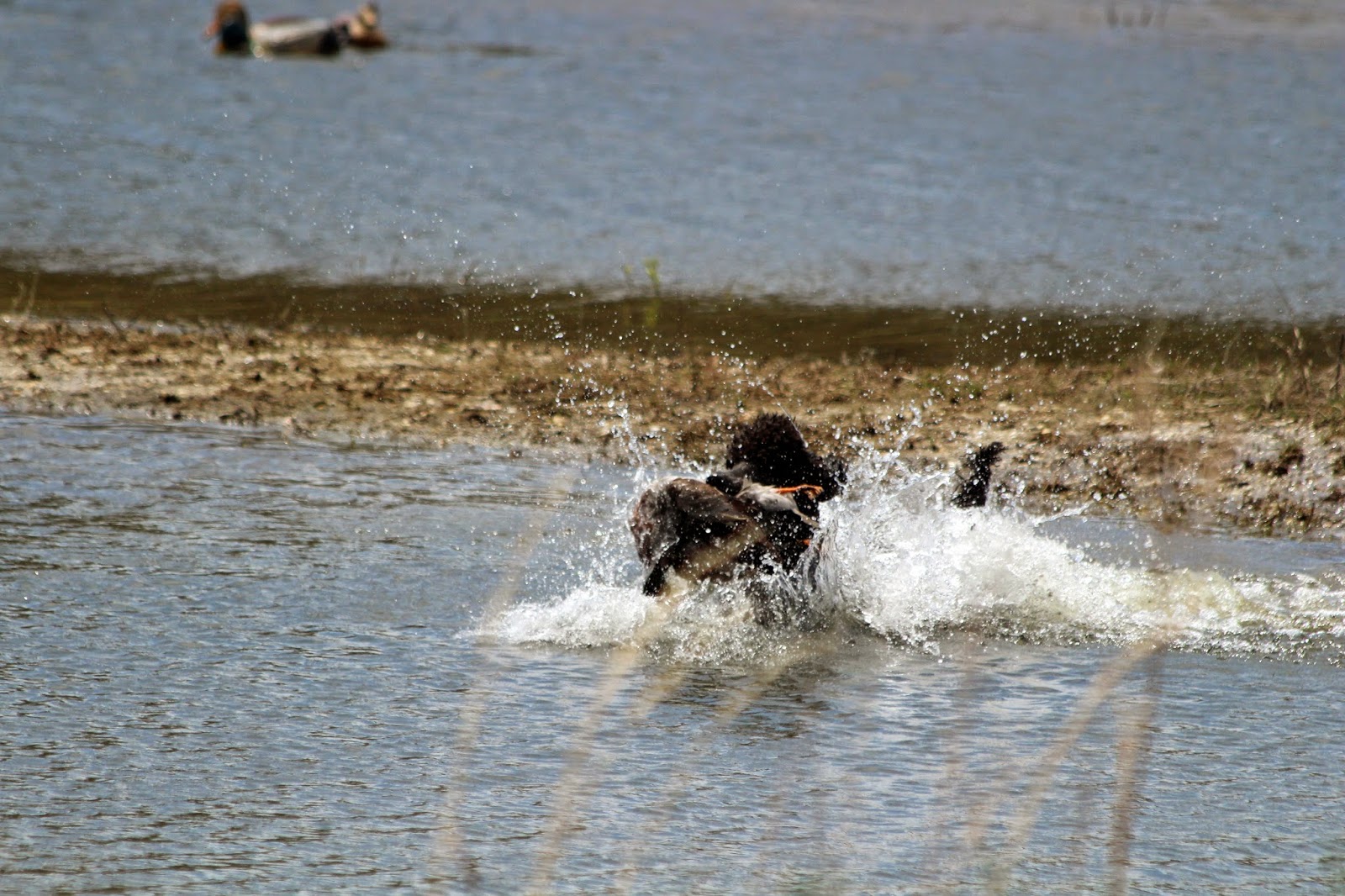 Monday we at last went to the Wicomico Civic Center for Day One , Agility Day!  Perri was entered in Open Standard and Open JWW.  We arrived when Excellent/Masters Standard was running and I set up the dog tent in the crating area, put Ein and Perri in there and spent some time enjoying the Standard runs.  I brought Perri into the stands two different times with a handful of treats so that she could take in the arena and relax.

We had a beautiful Standard run and Perri was totally happy and relaxed.  I was shocked and very grateful!  No zoomies, no biting me or pouncing, she just ran the agility course like we were on home turf.  We were completely clean but Perri fell apart on her weave poles.  She entered them and was weaving pretty fast (for her) but popped out at the 10th pole.  Ugh.  You only get one refusal in Open Standard and we quickly earned a non qualifying second refusal on our next attempt at the weaves.  A real pity because it was otherwise a very nice run, but I was overjoyed with Perri's performance regardless!
After the class the judge approached Perri and I during our ham celebration and said, "I just want you to know that when everything comes together for you two, and it will, that you are going to have a very, very fun dog to run."   That meant a lot to me.  This is not the first, second or even third time that somebody who does not know Perri has watched her...and told me something like this.  And the thing is, I know what they mean.  There is just something about Perri.  She is special, she is maddening, she makes me think, she makes me cry, but she is so worth it.

Next was the long Excellent JWW class followed by Perri's turn to run in Open JWW!  I chanced a start line stand-stay and Perri handled that just fine with no stressing down.  We ran the course clean and I even did a blind cross that was probably foolish but Perri handled it well.   We nearly made it to the end of the weaves when she popped out.  Sigh.  Watching the video afterwards, it was really more of a stopping forward motion and I probably could have gotten away with telling her to keep going rather than restarting the weaves.   Back to the beginning, shameless hand motion helping Perri get. through. those. weaves and 5.58 seconds over standard course time....2/10 of a second from being too over time (AKC rounds down.), Perri qualified and earned her OAJ at the PCA National Specialty!   It was a close one, so close it makes me cringe, but we did it! 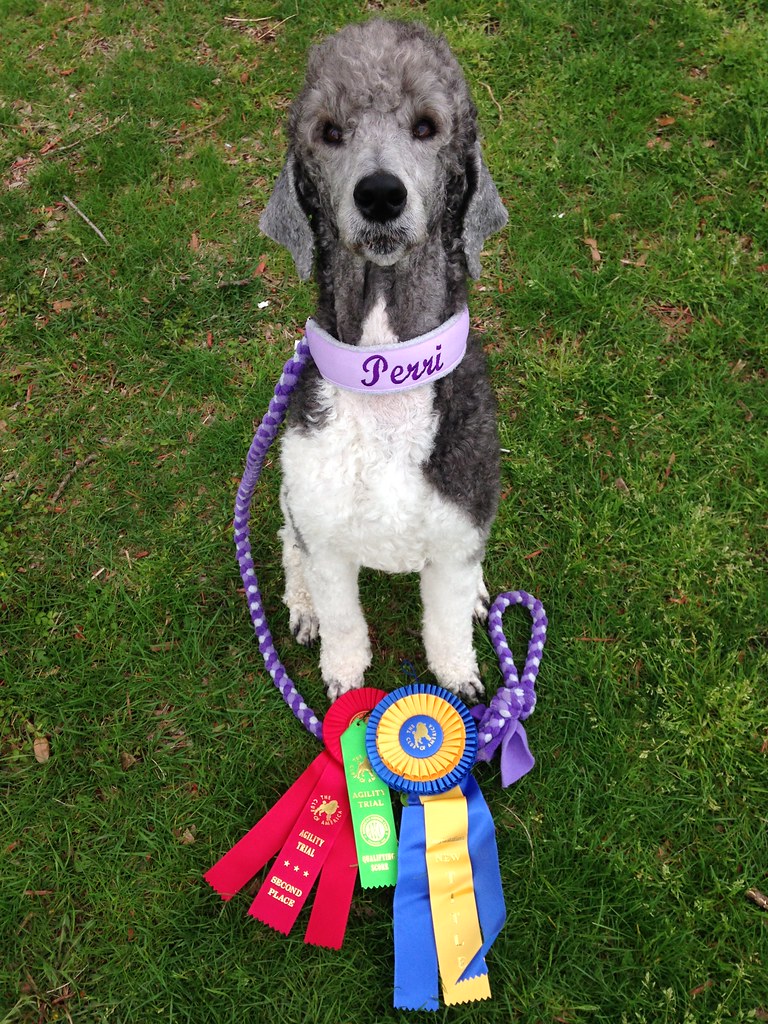 I have to admit that Tuesday I would have loved a second day of agility but it was to be Rally Obedience for us instead!   Tuesday was the Rally-O and Obedience trials.  I wanted very much to try Novice Obedience with Perri, but as I have been writing in the last few months, I do not feel that we are ready....still.  All in our time.  We did Rally Advanced instead, I saved our third leg for the Specialty.

As confident and happy as Perri was in this arena for agility, she was the opposite on Tuesday.  Constant scanning for danger, worrying, difficulty focusing on me.  My heart sank.  In the ring we scored a pathetic 80/100 and Perri made me work very, very hard for it.  I should be, and I am, grateful that she stayed with me.  That we qualified instead of a total catastrophic stress down episode.  Perri earned her Rally Advanced title but there was no joy in that for me.  I know part of the issue is that my confidence regarding heeling/obedience with Perri is in shambles and I am struggling with how to rebuild that and shake it off and find my joy again.  Dogs are sensitive, and many would say poodles are even more sensitive.  I don't know how to be what Perri needs in the ring right now.  I know one thing: we can do this someday.  I don't know how, I don't know when.  But I know that I will figure it out.  I watched the Novice Obedience class working and ached for how much I wished me and my girl were in that ring together.  Someday....

Despite ending on a slightly sad note with our Rally-O issues, it was an incredible experience for me and I would love to attend next year!  I especially loved to watch the standard poodles work in all sports, and could see more than a few with temperaments that are on the more intense spectrum of the spoo world.  I haven't ruled out a future standard poodle for our family, though I go back and forth on what breed of dog I would like in the future.  They truly are a very special, fun and enjoyable breed...they are so versatile and are up for whatever their human wants to share with them.  And miniature poodles are very cool, too!
Posted by dogbird daily at 6:13 PM