Molly has two lumps on her.   Two "non-lipomas" "we will keep an eye on them" lumps.  Tuesday morning one of those lumps had changed color to a dark red and there was bruising spreading out from around it.   That was enough for me, I called our vet to schedule surgery to have that lump removed - as well as the other one because she would already be under anesthesia.   I also asked them to take off a small skin tag that has been on her elbow Forever, just because I don't ever want it to get caught on something. 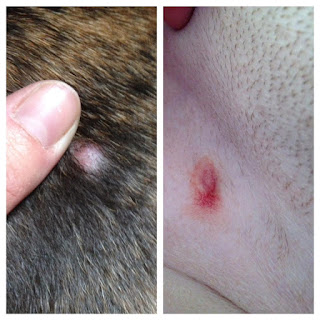 I hate that moment when you hand your dog's leash over to the vet or the tech and have to walk away.  Molly did an SPCA commerical worthy over-the-shoulder "But why don't you love me anymore?" expression before we parted ways.   I spent the day out at agility practice and hiking with Perri, we filled our time.   I got a phone call early afternoon telling me that Molly's surgery had gone well and that she was awake and recovering.   I could pick her up at 5:30pm.

Molly let out a squawk of neurotic, post-anethesia relief when she saw me and immediately began ridiculous whining.   The vet laughed and said that is the most noise she made all day, and I believe it!  We went over the discharge instructions.   Molly's pre operative bloodwork showed an elevated liver value, though none of the other liver values were elevated.   The vet told me he had no explanation for why that one value would be high, but he said they went easy on the anesthesia and that he would not be giving Molly Rimadyl for pain, but Tramadol instead.   That was fine by me, we have used Tramadol in the past and it works well for Molly.  And of course, oral antibiotics while the incisions are heeling. 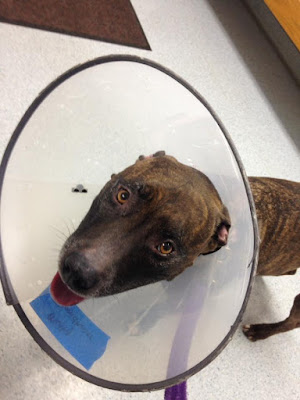 Molly was the best she has ever been after anesthesia.  She is normally very anxious for hours into the evening.  She was definitely sleepy, but was very restful.  At dinner time I gave her half of what she would normally eat as well as her allowed dose of Tramadol (she seemed stiff and was whining softly when she would move around.).  She kept the food down well and even enjoyed her Kong later in the evening.

Biopsy results of both lumps in 10-14 days.  Right now I don't feel too scared, I think I was just being paranoid and playing it safe.   But, better safe than sorry.   I didn't want to have any reason to think "if only". 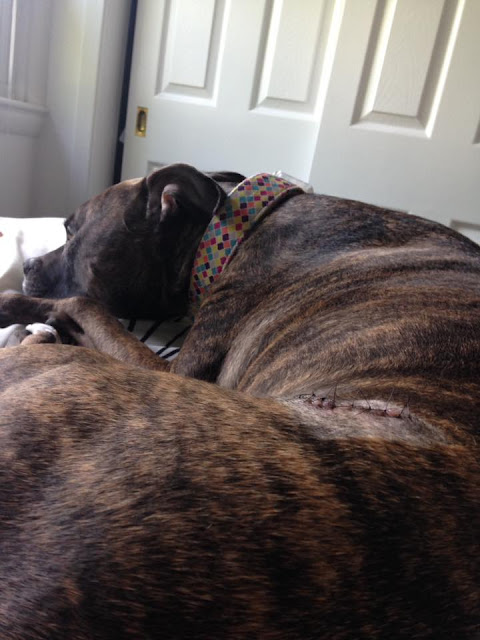 Posted by dogbird daily at 6:59 AM