Ein and I had our first Cynosport Rally-O trial since wintertime this past Saturday.   We are trying for an ARCHMX - Rally Master Champion.   A dog needs to earn 10 Triple Qs (Qualifying Scores of 195 or higher in Levels 1, 2 and 3 in the same trial.).   Since Ein was handling double trials reasonably well stress and energy wise (that is four runs.), I feel comfortable asking for three runs per trial from him.    That is one less run than he had been used to, and Level 1 is much easier (and on leash!) than Level 2 or 3.   I will not do a double trial with him during our MX journey, six runs is too much. 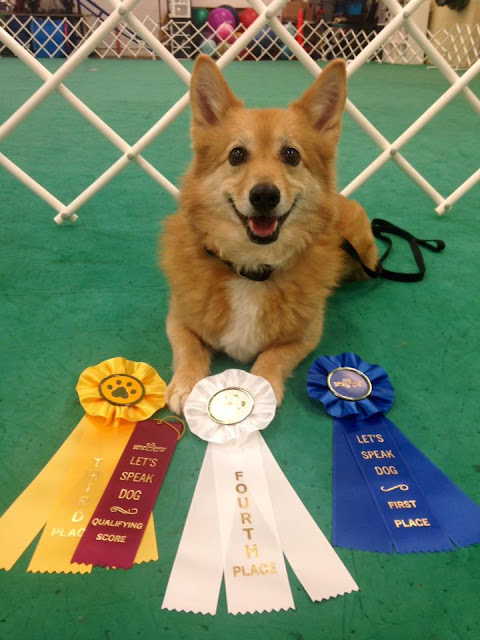 It went well!   207 in Level 1, 204 in Level 2 and 205 in Level 3.   The rally courses were set up so that the final line of exercises, each time, had to be run alongside the ring gating.   We lost all of our points there.   In Level 1 and 2 I had to re-cue a down because Ein was too worried to down next to the score table.   Level 2 we lost an additional 3 points because the re-cue happened on the bonus exercise where Ein needed to lay down from a sit-stay and wait until I returned around him.   Instead, he crept forward but dropped immediately when I told him to the second time.   Level 3 we had a re-cue of a finish and I forget where the other 2 points went.   But hey!   It was a good time out with my little guy and he certainly enjoyed time alone at a trial with me all to himself.
Posted by dogbird daily at 7:05 PM