Catching up from this past weekend, on Friday and Sunday both girls played CPE Agility.   We haven't played much CPE consistently since last year, so it was a bit like coming home - especially at my favorite CPE trial site.

Perri was apparently really happy, too.   Really, really happy!   The curse of the poodle zooms on dirt was back in full force as Perri readjusted to running on the dirt surface that has always made her silly!  Honestly, it was just what my soul needed - a fun and silly time with Perri and a happy dog in the ring.   I am fully aware that many dogs who are zooming or disengaged with their owner are not happy dogs, they're blowing off stress.   But I know my Perri, she loves this dirt!

Standard Round 1....not much improvement!

This is a video of Molly doing the second round of Standard.   Molly was having a quite awesome morning with a lovely 40 point Fullhouse run and a gorgeous first round of Standard with beautiful weaves (though we NQd due to a ridiculously overly ambitious blind cross on my part!).   This round we bobbled really soon, recovered but then my rear cross pulled Molly to the wrong end of the tunnel.   I can see why she did this of course, but normally she would have committed to the correct end and allowed me to cross sooner.   But she was a bit insecure after the bobble, so I know why she slowed down and wasn't as confident on her next line and I should have supported her more.

Perri also hesitated with that push out to the jump on obstacle #5, though I rounded out her approach a bit more so she did not run past it.   Most dogs whose handlers chose to stay on the right side of the jump also had some sort of bobble when it came to that spot, even a very accomplished team that I admire.  Interesting.   Would love to work that sequence in a class and analyze it!


That did it for Friday!   We returned Sunday with each of the girls entered in: Standard, Colors, Snooker and Jackpot.   Perri's dirt zoomies were renewed for Sunday morning's Standard!   Molly had an absolutely lovely run but would not be deterred from the wrong course tunnel after the A-frame!

Colors was next!   A real heart breaker on Molly's run, I just did not push her out well enough and she takes the backside of the second to last jump.   I wish I had said "out" instead of "jump" to her because I think that would have pushed her out just enough.

With Perri I benefited from my earlier mistake, and though she started sassing up at me for confusing her at the end of the A-frame, she came back to earth and finally Qualified!   Also did her first set of weaves for the weekend...

For Snooker both girls did the same plan.   Molly was getting pretty tired by this point but she played along!   Perri did a gorgeous run which of course I do not have on video!   Her only bobble was to stop and stare at me on our second red, "Why are you facing me if you want me to do that jump?!"  but after that she really came around and was running fast and very engaged with me!

Our last run of the day was non traditional Jackpot.   I had to smile when I saw the Gamble area!   I got out a tug toy lined with fur that Molly never gets to play with and it did the trick.   She was back on fire!   She made quick work of the 25 point "C" gamble and then we made our own Tunnelers class, doing straight tunnel after straight tunnel!   Molly earned 73 points, second highest in the entire class of all levels and heights (second only to of course, a border collie!)

Perri was no slouch either and she also got the 25 point gamble!   I used our time after that to finish earning our required points and practice "dirt weaves." 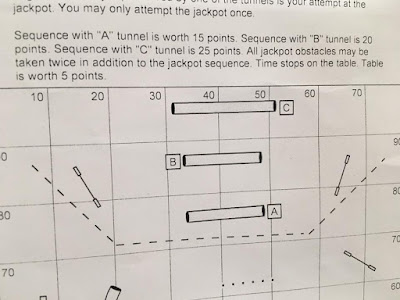 Posted by dogbird daily at 8:09 AM