A bit of a delay getting around to posting our Day 2!

It was just the same: Ein was a total rockstar, Molly was slowish in the heat but a consistent Q machine and Perri was a squirrel!

We started with Perri-only in Standard.   I don't truly remember too much about the run other than it started with Jump to Weaves and Perri skipped a weave but weaved fast when I allowed that and just let her get back in.   She also did a fast teeter, I remember being happy about that. 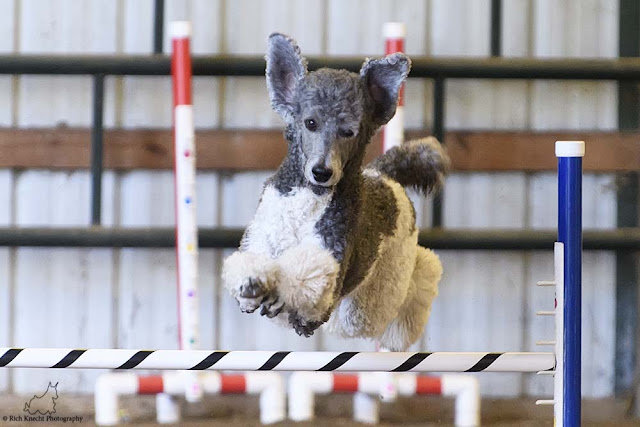 Next we did Colors.   Molly was fast and accurate and did a sub-20 seconds run with decent weaving and no bobbles!   Perri ran around a jump, did slow weaves and was 3 seconds overtime (allowable by CPE, thankfully!) 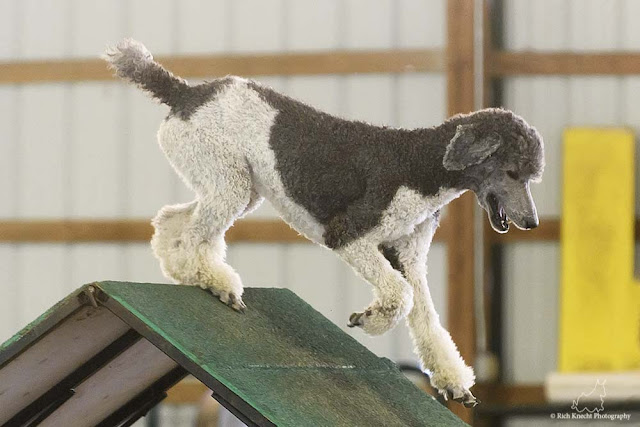 Ein got his chance in Colors Level 1 and was Mr Happy, though at the end I would normally have rear crossed a jump, but didn't want to since I didn't think Ein would carry over the jump (I did not want him to take the bar).   We had a bit of a confusing moment there but we re-collected.   My Ein is a forgiving dude!  Note to self: teach Ein the rear cross. 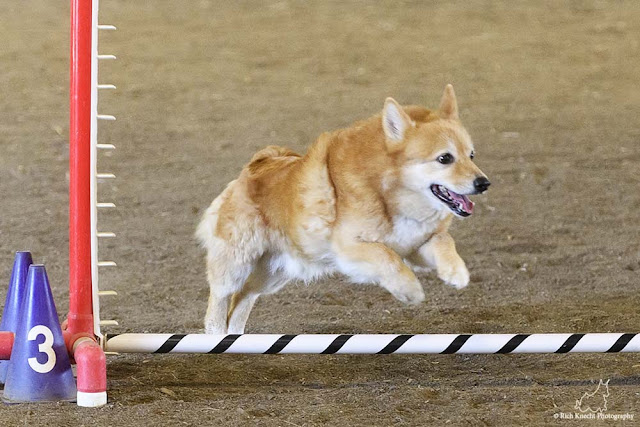 Next was Snooker.   I was late getting to the line with Molly and by then she was really rather hot and tired.   She was not running slow but she was definitely slow by her normal Standards.   I let her skip the weaves since they were Number 7 and we already had plenty of points. 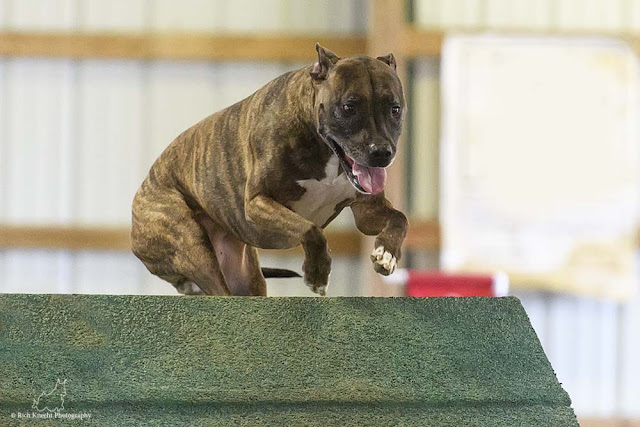 Perri got to go next and was pretty good all around but did have one moment of staring and freezing.   I just pushed right through it and let her approach the jump from a different angle and she was back up and running in no time.   She was so happy that I decided to try the weaves at the end of the numbered sequence, and she did three of them like a boss but then just walked out of them.   Well, three is better than none! 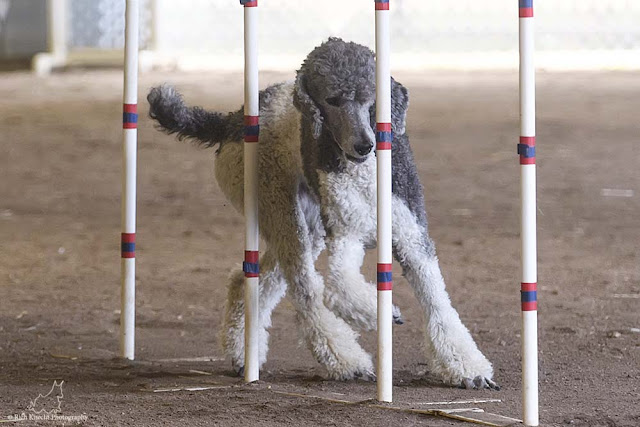 Our last run of the day was Jackpot and Molly got to sit that one out.   I entered Ein in it since it was non traditional, and of course Perri since she needs a few more Jackpot legs for her C-ATCH.

Ein went first.   There was a dividing line down the center and there was a tunnel, jump, aframe and tunnel all down the center.   There were two gambles and you could handle one or the other from your side of the line.   Ein of course had no issues and did his gamble, got his points and qualified! 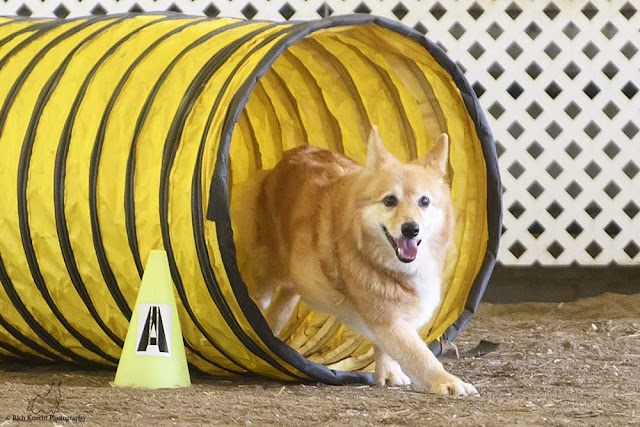 Perri was next and she did a pretty good job of staying happy.   She got plenty of points and then we went for our gamble.   The first three obstacles were great, but after the Aframe it was a push out to the far side of the tunnel.   Perri instead ran behind me and made a beeline for the wrong end of the tunnel that I was not indicating at all.   I said, "Stop!"   She stopped.    She gave me the stink eye.   I told her the correct end...three times.   She was disgusted with this directive.   She finally trotted through that tunnel as slooooooooooooow as possible for a qualifying round, .06 seconds over time.   Thank goodness CPE rounds down.   If you are one full second or more over time in Jackpot, you NQ.   Not Perri's first time doing a run so close to over time it is scary. 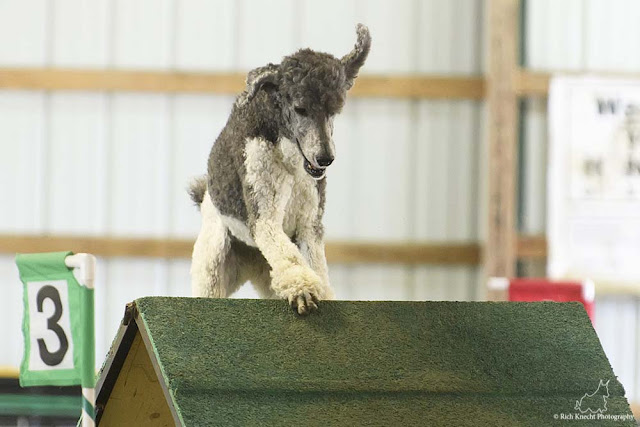 So.   I really had a nice weekend and it tickled me pink to have the "whole family" out playing agility together.   Ein ran with some nice speed and drive and was totally enjoying himself in the ring.   He was not sore or limping anymore than usual after the trial (or the two days of swimming that we did.)   Ein never walks like a sound dog, but he walked like "his normal".   Ein makes my heart so big, I am so proud of him.

Molly was not her normal "bat out of hell" self.   I was staring at her left front all weekend and feeling worried.   But she stayed sound and did well in the ring.   Molly has never been a fast dog in the heat, and her speed has diminished this year even before the "foot thing".   I am so grateful that Molly could play in the ring with me.   I have no idea if we are 100% in the clear yet, but this weekend felt like a step in the right direction.

Perri....oh, Perri!   She was her normal hot and cold self.    I just rolled with it and enjoyed what she was giving me.   I did a lot of cheer leading and exercised a lot of patience.   Perri is Perri.   I got to play in the ring with my beautiful, sound dog and that's a whole lot right there.   One of Perri's best friends in the world, another standard poodle, is currently battling a yet to be diagnosed neurological issue.   Weakness, legs giving out or knuckling, and general tension and pain in the spine.   I have a young dog who is sound of body, perhaps a bit quirky of mind, but she's still there playing the game with me and she's still there going on hikes with me.   So, hey.   I'm blessed.   And I'm grateful.   Perri was sent to this earth from her strange little planet to teach me every chapter of the Book of Patience.   I love her and I will persevere with her. 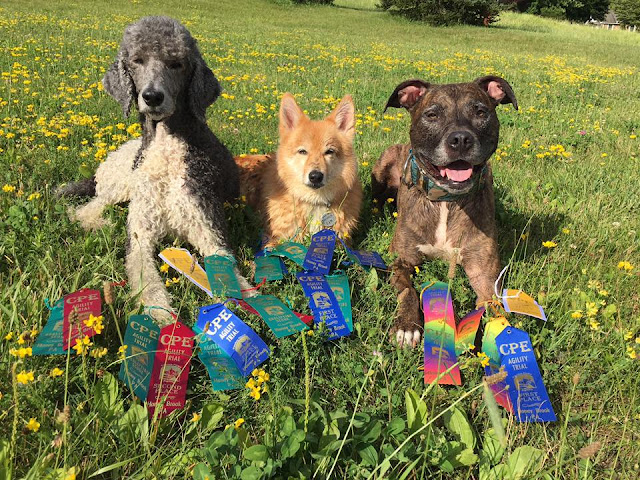 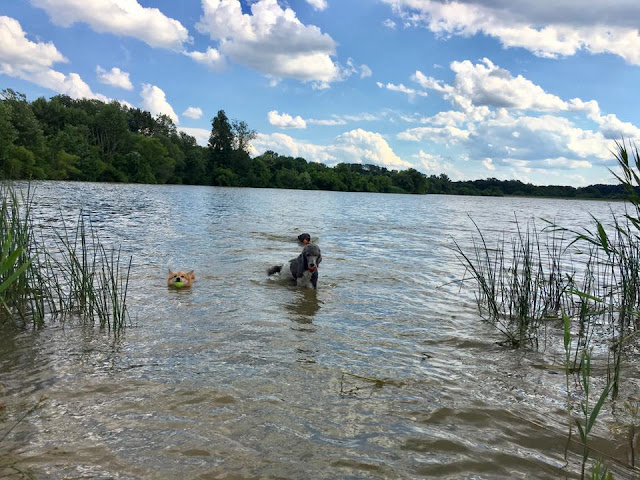 Posted by dogbird daily at 5:53 PM