Another round of CPE Agility, one day only this time!

Molly got to play in Jumpers, Colors and Standard.   Jumpers was beautiful, the video is of Colors and Standard was going great until she fell off the dog walk.   One minute we were running, the next my dog plopped down on the ground where I very much did not expect her.   I know she came out of a tunnel very fast and I checked her with my outside hand to get her up the dog walk.    I trusted her with that and kept running.   The person doing ring crew near the up ramp said she approached the ramp crooked and lost her footing, tried to recover but when she could not, she jumped off.    I am honestly glad that she made that decision, before completely wiping out and taking a really scary fall.   It still surprised me since Molly has never once even in her craziest of crazy days lost her footing on the dog walk.    It could have just been a fluke, could be related to her age - but the outcome was okay and Molly continues to not show any ill effects so we are just going to move right along.

Ein came along and enjoyed two runs - Jumpers and Jackpot.   The Jumpers video is below - I got myself stuck on the wrong side of the tunnels since I didn't want to rear cross tunnels with him.   Awkward!   We will have to do a little bit of training on rear crossing tunnels.    Jackpot was great, collect points and you had your choice of two distance challenges.   Ein did one that was Jump, Tunnel, Back over the same jump.   He needed some handler motion and a second cue and cheering to get him into the tunnel at a distance but he did it!

Perri was Perri!   I tried very hard to speak only positive words.   Jumpers she was pouncy wild poodle for her first run of the day.   In Colors she was a bit demotivated and her weaves were a mess.   I did the wrong closing sequence on the last three jumps and NQd us.   Snooker was a Q because Snooker is Perri's Game!   (still, not good weaves.)  Standard was good except she absolutely wouldn't weave.   She entered them and then just went into the SpaceZone and then started zooming and barking at me when I asked her to do them.   I broke down and told her "you stink." and we left the ring.   I was still worried about Molly, since her dogwalk fall/jump had happened about 10 dogs ahead of Perri and it eroded my ability to be patient and upbeat with Perri.  I feel ashamed of myself but also, frustrated.    Jackpot was nice and Perri did both distance challenges though there were some moments of stopping and staring.

Sigh.   We did have a very enjoyable evening in agility class tonight with phenomenal powerhouse weaves.  Perri would not weave like that if she was injured.   I remember when she was weaving while injured, she would either walk them or bounce step them.   In class, when she is energized she has a beautiful single striding way of weaving and that is what she did tonight.   It's trial stress, hers and mine.   I know it is difficult for her to focus on the dirt.  I know she was hot.   I know that where trials used to energize her and empower her, there is stress.  These are things I know.   This weekend we will be trialing indoors, in air conditioning and on artificial turf.   Positive words only, and we will see how that goes.

And of course after our trial, there was swimming! 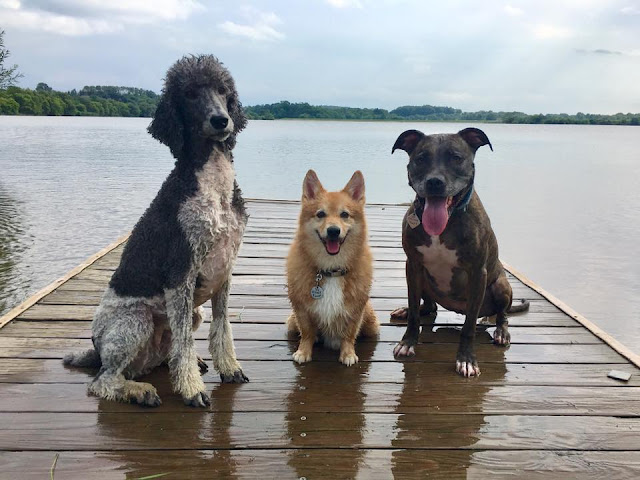 Posted by dogbird daily at 6:44 PM