Today I took Ein to what will be his final rally obedience trial. When I saw that today's trial would be at the same training club as our first trial, and under the same judge, and he would be able to finish his RLVX5 I knew it would be the perfect opportunity to retire him.

I did not study or bring a copy of the new signs and regulations with me and that was a big oops! We lost three points for some handler errors on our first run (Did the figure 8 the "old way" and asked Ein for a sit on a sign when we should have heeled forward.)

On the second run I did a better job of doing the new signs, thanks to a sensible competitor who had the rulebook saved on her iPad. (a good idea!) We got to do the new "Mini Spiral Left" (you can see us performing that in the video, it was the first exercise we did.). I also had to look up the Call Front Forward Left as the sign looked so different that it used to, I was worried about doing something wrong.


Ein did something unusual in that he sat on both of his Moving Stands. Ein has never done this before but I feel it was due to a lot of pain he is having in his left wrist lately. (Winter is very hard on Ein.) Ein's left front was always his good leg but I can see his left wrist starting to get that hyperflexed look that his right wrist has. On our first run I saw Ein stumble on the Moving Stand - and that makes me think that when he does that exercise he typically weight shifts to his front left. But today, it hurt him to do that so he shifted all his weight to his rear and sat instead (he has good knees!) I notice on the video when I re-cue him both times, he makes a point to weight shift to his front right because he is ready for it this time instead of doing what he has always done by muscle memory. A good reminder that when competing with a senior dog, or any dog, the importance of keeping in mind that pain may be the cause for them doing something out of character. 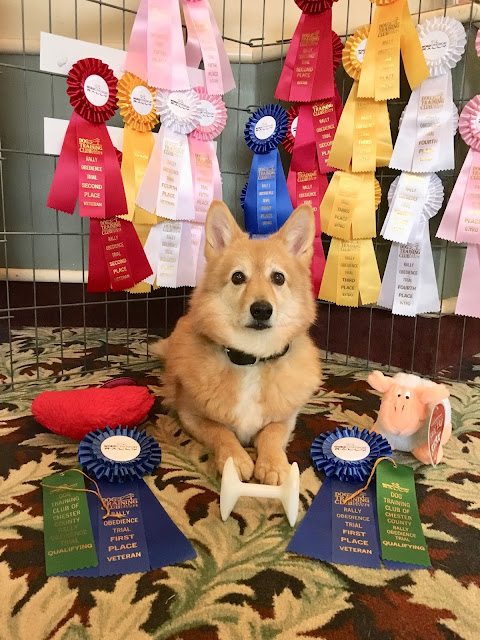 Posted by dogbird daily at 2:06 PM