A little while ago I was shocked to see a PSD trial pop up local to me and pounced on the chance to play! I again did minimal entry for Molly as I feel she is still preparing for prime time, and I entered Perri in Distance, Speed and Buildings. I later decided to give Molly's Containers entry to Perri, as I felt I had worked hanging containers to a confident level with Perri, and Molly was still dealing with a lot of overarousal issues with All Things Containers, especially hanging.

Perri's first run was in Distance class. We entered the search area and I saw a bunch of little cardboard valentine's day boxes on the ground and felt a "whew", and then I saw some valentine's socks hanging behind the boxes and thought "Hmmmm." Perri worked down the row of boxes closest to the Distance line and caught odor and she followed it to the cone that marked the side edge of the distance challenge. She sniffed one of the hanging socks and did not care for it thank you very much, not a fear response but a "weeeeeeeeeeeeird I better just not deal with that.) She stressed a little and returned and looked at me, but continued searching when I asked her to. She went to a container on the ground near the sock she had searched and gave it a nose push and knocked it over, so I called Alert. And we got a "No". I feel Perri was stressed by the combination of hanging (though not suspended in air.) and ground containers and either was fringing or alerting on something she felt was more accessible, or she was just false alerting so that we could leave the search area. No matter, we have a new thing to work on: combination of hanging and ground containers. Okay!

Next Perri did "Speed" and this was our first time playing it. It is guaranteed to be a box search, awesome! In Novice, there are three groups of three boxes and in each group there will be a birch hide. (So, three total hides.) You have 45 seconds...GO. Perri did it in 41 seconds and was a very honest careful worker.

At this time I enjoyed my ability and permission to leave the trial site and go get coffee and a fabulous donut from the nearby Best Donut Shop Ever...it's nice to have relaxed rules!

After a break for Ribbons and Lunch Perri had her Container search. It turned out to be large cardboard and plastic Valentine's boxes arranged on the floor in a heart shape. Perri made quick and adorable work of locating the container and in the time I called alert and confirmed with the judge it was correct she gently slapped a second paw on the container, sassy!

Perri's day ended with Buildings. She made a "bee line" to a tire laying on the ground and took a long time sniffing and sniffing it. She left it to search some other things, returned to the tire and alerted. The judge liked my handling and wrote that Perri "just had to make sure!" Yep, that is Perri! She often makes sure to search a whole area even when she knows right where a hide is, just to be sure. 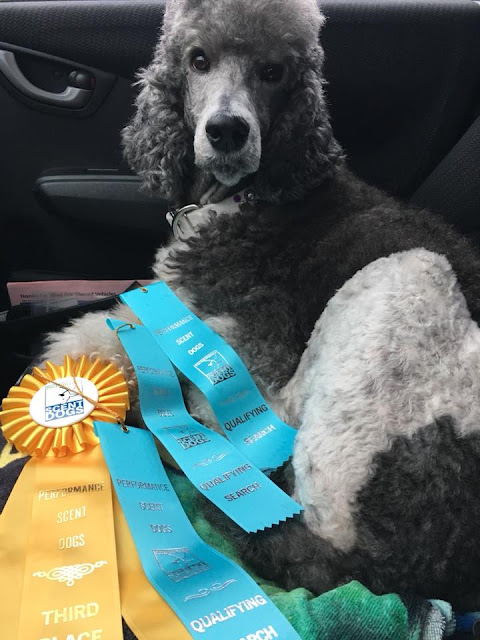 Really great day out with Perri and so much gratitude at being able to play in a venue we love so close to home! After our trial in November I was imagining we would have to be waiting much longer, or taking trips to New England to play. We got double-lucky because another area dog training club also added a trial, so in a month we get to play again.

But! Molly did get to play in Buildings. Since the search area was fenced in we were allowed to work on or off leash. I have been starting some off leash work with Molly in practice (and Perri is always off leash if permitted.) so I thought...why not. WELL I WILL TELL YOU WHY! Molly went straight to the hide, again in a (different) tire - and I thought, "Well. That has to be residual, it can't be the hide." We were later told that they would never place the same item in another search with residual odor on it. I have to wonder if I had not had the split Novice classes and already run Perri in Novice Buildings, if I would not have listened to Molly's extreme interest in the tire rather than thinking she was just searching on residual odor. Nonetheless, there was no alert which Molly is usually very regular with. The antics began! Leaping on top of a table at least five times, almost knocking a stool over several times and knocking a floor cleaner over in the search area! She was crazed! We timed out with Molly getting higher and higher and the judge suggested the leash back on. As soon as I put it on, the judge said "Now where did she spend a lot of time?" and I turned toward the tire and as I was saying, "That t-...." Molly ran over to the tire and pawed it -_- Another learning experience! I am working on a lot of overarousal and brain blowing issues with Molly and nosework so I think the leash being off was an added !!!!!!!!!! to our day that we did not need! One cool thing is that this trial, off the start line Molly was a lot more focused on searching instead of turning and staring at me immediately. That's a good thing!

Molly's next Nosework related event will be her NACSW Birch and Anise ORTs so I will turn our training focus onto keeping our brain with containers.
Posted by dogbird daily at 3:37 PM