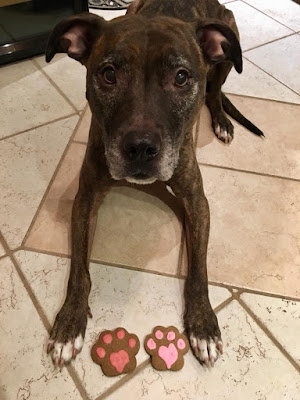 I took Molly to our local dog bakery tonight to buy a special treat to celebrate...one year post diagnosis! Molly is just happy to have another special occasion to be showered with treats.

One year ago today, Molly was two days post op lymph node removal and I was finishing up my work day and my phone rang. I could tell by the tone in my veterinarian's voice when he said "Hello" that Molly's biopsy was positive for lymphoma. I felt dizzy. I also felt optimistic. My dog seemed so healthy, it would be all right.

I soon learned that most dogs with lymphoma seem "perfectly fine" when their node(s) swell and give the classic symptom of lymphoma, and my optimism was shaken. I was overwhelmed when it came time to choose an oncologist for Molly. I called two oncologists and we went to the first one who could schedule us. And not much longer after that, I became more lymphoma-savvy and left our oncologist for a second opinion.

During that time Molly had chest and abdominal x-rays, an abdominal ultrasound, and an unfortunate bonus surgery (that I regret doing.) to remove more mast cell tumors in compliance with our first oncologist's request. All imaging was clean, all further biopsies revealed that we had removed lipomas or more low grade mast cell tumors. Our new and current oncologist confirmed that Molly has low grade T-Cell lymphoma, an uncommon type of canine lymphoma, and a lymphoma that has the same prognosis with or without chemotherapy. We decided not to do chemotherapy.

She's humping Perri, she's blasting in the back door without letting me wipe mud off of her feet, she's got cabin fever, she's spinning in 7 circles for her food, she's healthy, she's unhealthy, she's alive, she's my best bad girl and I love so much it makes my chest hurt.

All I can say is that I better be able to take Molly to the doggie bakery on February 8th, 2019 with no more harm to her body but a few extra white hairs on her face.

Posted by dogbird daily at 5:30 PM