When I scheduled Molly's NACSW Odor Recognition Tests (ORTs) I kept thinking "I have plenty of time." And then I didn't. While Perri's best element in Nosework is containers, it is Molly's worst. We struggle and struggle with overarousal, frustration, criteria, staring at me. Molly gets frustrated, she smashes boxes, she walks over boxes, she is a Container Godzilla.

But it is not my first rodeo with Molly and her overarousal issues so we do regular box boot camps and we have had some nice progress. But then today's date arrived and I didn't feel like we had made quite enough progress. But I also wasn't going to scratch today's sixty dollar entry for the sake of wishing we were super duper ready.

Birch was first and Molly was like, "What? I am awesome at Containers."


So that was excellent! Birch was what I really wanted today, because now we can trial in NW1! If we didn't pass Anise, meh. NW2 is a long way off and we could try again another day.

I had the absolute fortune of being the very first dog on the run order of about forty more dogs, so we went for some breakfast and some geocache fun after our test. We found a very cool tower and the dogs had to be posed in it. It must be a full moon, both girls are looking straight at the camera for a change. 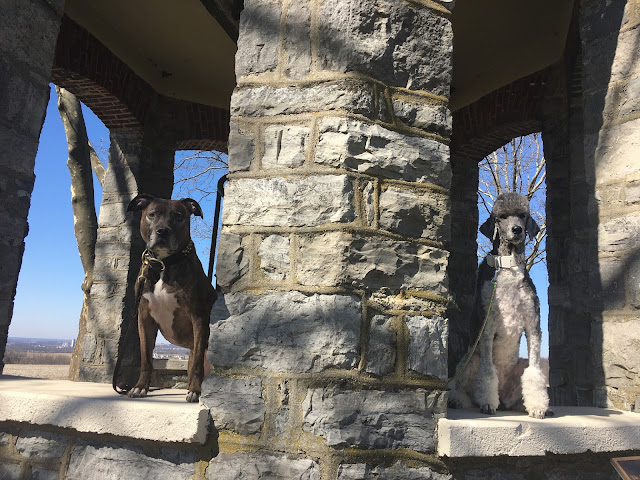 We returned to the trial site for our Anise test and this time Molly was the second dog. When I went to switch Molly's leash from her collar to her harness (this is part of our "start line" routine, so that Molly has an extra contextual cue that she will be searching for odor.), she did this spasmy splat into a down. Crazed. I have no idea why she did that.

And then we had shenanigans. A fly by false alert on the first box. Some box sniffing and another false alert, a little more committed but I could tell it was a false. When Molly is in odor on a box she gets sort of lower and won't use her feet initially. She lowers and gets real sniffy and then uses her foot if I don't get in right away. Her overarousal false alerts are feet first not nose first. This is stuff I am learning.

I chose to go back to the start line and do some neck stroking on Molly. This, folks, is where we remind ourselves that three minutes is a long time. Don't panic, dont' feel frenzied. There is time. And there was. This time Molly did alert on the hot box, but I did not trust her. I almost called alert because she did get low and sniff but then she got frustrated with me and flipped the box away from where it had been sitting. That sort of box flipping and displacement is something she often does when she is high and just falsing for...Molly reasons. To her credit she sniffs boxes for me and does no more false alerts. She also passes the hot box twice, no doubt demotivated by my lack of response. We ultimately went back to the start line. More neck stroking. And then I send her into the search again. I felt that the second box on the right was the hot box and decided that if she gave it any attention, I would call it. Molly gives a mighty shake, throwing her stress away and alerts on the hot box and I called alert fast and rewarded her.

While the Birch test felt great and sexy and fast....the Anise test was where the true victory was. I always let myself get rattled but today I did not. I kept my cool and was logical about the clock ticking away and did what my dog needed. I read her body language. We found our way back to the same page where we could communicate effectively with each other. We got through it, we passed. Really cool.
Posted by dogbird daily at 7:08 PM