The more behind I get in blogging, the more I want to procrastinate! However, Molly had her first NW1 trial in NACSW Nosework on Memorial Day and it was such a special day.

This trial is officially the farthest I have driven for Nosework at nearly 2 1/2 hours away, and it was also the most costly due to the fees put upon the hosting club by the selected trial site. No pressure, Molly! Due to heavy rains in our area, the area they wanted to use for parking was too muddy to be safe, so parking was very close quarters. I actually waited in my vehicle for 15 minutes in a line while the volunteers slowly found spaces and directed each car in.

The weather was not windy, it was not hot. It was very overcast and a bit drizzly but barely so. When everybody was parked we had our morning briefing and walked around to all of the search areas. This trial was different than the NW1s I have gone to with Perri in that they split the run order and ran two teams at one time. One half searched Interiors and one half searched Containers. I was very excited to be #26 with Molly, but with the group split in half, that meant Molly was searching nearly last in both searches. She was last in Containers.

Molly's group ran the Interior search. And Molly wasted no time! She was whining at the door, of the little bunk house we were searching. She knew why we were there. They opened the door and I held her on the start line and let her sniff the air a bit and then turned her loose. 12.38 seconds and 6th place! The judge said "that's a fast paced dog!" and even complimented my handling of "a fast paced dog" on our score sheet. 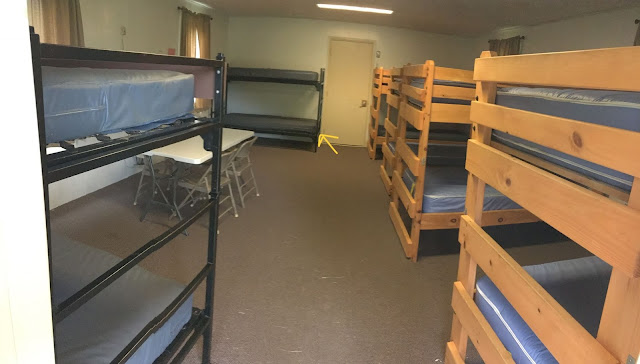 Next was another wait until the ennnnnnd of the run order for Containers. I was trying not to be nervous but I was. Shenanigans can happen in Containers with Molly and I was determined not to make a silly alert call out of nerves if Molly started acting up. The search ended up being absolutely charming, adorable and comical. The videographer even used it as her sample video! 25.77 and 7th place!


The hides were set for Exterior and Vehicle elements and then a 45 minute lunch break. I finished a book I had been reading for a while (Dog Man by Martha Sherrill), ate my lunch and tried not to boil over with that "all or nothing" NACSW stress. We had a great morning, but in NACSW your dog must pass all four searches in order to title. If you fail one, at your next trial you start all over again. Part of the challenge! I consoled myself with, if we fail an element it's better to do it in the afternoon! Hope is a wonderful thing!

In the afternoon, things were run the way I have experienced in the past. Molly was #26 in the run order and all competitors ran in order. So, Molly did her Exterior search and then her Vehicle search one after another. I was so grateful for this, a lot less waiting!

Exteriors was first and it was her longest search of the day. You can see on the video, Molly really works odor and I'm proud of myself for staying out of her way and not over managing her or rushing her. She was working hard! The judge wrote "great pattern and bracket on odor". 54.65 and 23rd place on that one.


We got to head straight to Vehicles! They were organized in a way I had never had Molly search Vehicles before. I confess, Molly doesn't get to practice much with Vehicles. We do not go to a class and I have only my Vehicles and Vince's truck and landscaping trailers and equipment. Sometimes we can practice on a friends car or when I am daring I go to the post office on a Sunday. But Molly has this beast mode birch = food raw talent and so ... we do the best we can. Regardless, 16.20 seconds and 6th place. One of the volunteers told me great job even with a distraction and it wasn't until I got my trial video this past week that I understood what she meant by distraction. Somebody yelled "loose dog!" during our video. It was a neighbor dog. I literally did not even hear this while I was doing the search with Molly. My skills of focusing on my dog must be improving!


Molly NW1! I was high as a kite, so freaking excited and proud of Molly and I had so much fun! After two no-pass NW1s with Perri it was exhilarating for Molly to pass on her first try! This is no bust on Perri, she's a hard little worker and has a lot more stacked against her mentally than Molly does. Molly's talent and drive is very exciting and I really want to do right by her and let her soar to her potential. (As it is, I have done a big fat zero Nosework training since the trial. Boo!)

The award ceremony was a great feeling knowing Molly had titled and done a smooth job of it! Molly not only titled but she earned the Pronounced designation on all four searches and that is Kind of a Big Deal! "The judges may ‘Pronounce’ handler/dog teams demonstrating exceptional technique and/or teamwork"

And it did NOT STOP THERE. At every NW1 trial, a special award called the Harry Award is given out to a rescue dog. From the NACSW rule book, "A long time nose work dog, Harry, passed away just days before the Inaugural nose work trial in August of 2008. The Harry Award was established in loving memory and honor of Harry, the Beauceron, one of our earliest nose work dogs that showed tremendous enthusiasm and promise. The first Harry Award was presented at the Inaugural Nose Work Competition, August 9, 2008. The Harry Award is given to the most outstanding rescue dog that demonstrates extraordinary ability and spirit in nose work."
What is not in the rule book, and this story has been told at every NW1 I have been at, is that Harry died while out hiking with his owner. He was bitten by a venomous snake, after getting in between the snake and his beloved owner. You cannot help but choke up with tears every time. 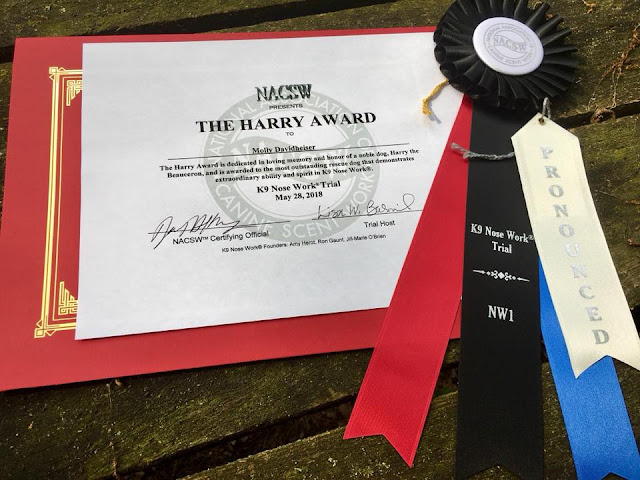 I knew about the Harry Award. I wanted it. And I thought Molly really had a shot at earning it. She is fast, talented and a real blast to watch. Turns out, the judges thought so too and so they chose Molly to earn the Harry Award. And when your dog wins the Harry Award, you have to tell everybody about your dog.

So I did. I told them how she is a pitbull, she was a stray, she was returned to the shelter by her first adopters for being "too much", she is my first agility dog, she has titled in many different sports, she has gusto and spirit for any endeavor I desire, she is an incredible partner and game for anything. And she also has cancer and her days are numbered but we live them all to the fullest and I asked everyone to appreciate every single day with their dog. You truly never know when it is your last.

It was hard not to cry. I love that dog with every cell in my body and I was honored to be on the other end of the leash with her, smashing her NW1. Molly's agility days are truly coming to a close, but it is so exciting to see her passion for this new to her sport. I look forwards to our continued journey in Nose Work together! 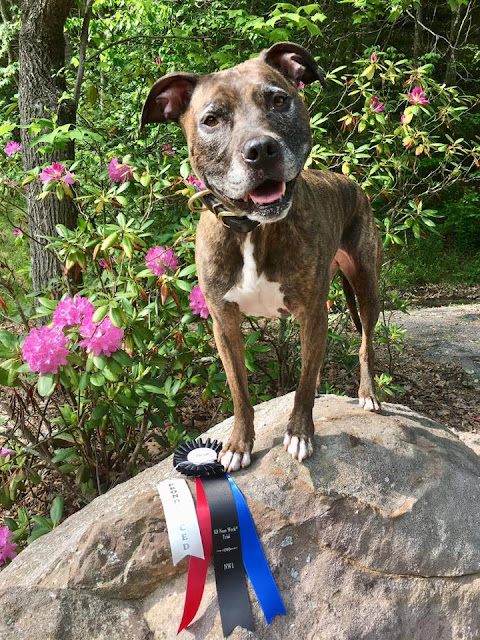 Posted by dogbird daily at 6:58 PM