Since I'm so "behind" on blogging I will lump all three of the USDAA trials the girls and I attended in June into one reflective post!

I chose minimal classes for each of the girls, but for Perri even moreso. We did P2 Gamblers and Standard on the first Saturday of the month. Pretty good engagement, decent speed on each run. Did not "get" the Gamble, would not weave in Standard. Perri's weaves are intensely impacted by her environmental stress and the weaves were next to the large open side of the building that has a clear view of the off leash exercise area. Anyway, no melty poodle moments.

This past weekend she had a round of Snooker each day. On Saturday I missed the briefing since I was running Molly in the other ring, and I missed the memo: you can only do 3 reds. Perri was very tentative off the start line, very slow and worried through the run. I had to do my crouch and ask for a down reconnect moment and then she started really running but we got whistled off for doing a fourth red. It was probably a blessing as I was forced to take her off and reward her after she was running nicely! Sunday was probably her best of the month, and I made a plan so that we could start with the Aframe. She really loves the contacts and they are a confidence booster. She ran super fast, did her Aframe contact and did not turn off the Frame to the next Red jump but instead took the tunnel in front of the Aframe. However she came out of it running fast and took jumps I cued all the way to the ending (about 2 or 3 of them.) and she was actually feeling safe and really enjoying herself so that was a great thing to end on! Trial hiatus for at least a few months for Perri now and I believe we will need to return to Intro, perhaps indefinitely, at that time.

Molly did quite a bit more! It was really great to have my girl feeling sound and able to enjoy a few agility weekends together. The first weekend of June we did four runs total, one on Saturday and three on Sunday. We NQd everything but were really close in many of the runs! Jumpers is the video below, Molly got a little strange about either the judge or investigating the dog walk. It was weird behavior for her. I was really happy with the run otherwise. We also ran Gamblers and were one point shy of a Q! The Standards just weren't happening!


Last weekend hell froze over because Molly actually qualified in P3 Standard, and on a course that had a rather low Q rate. Where did that come from?! Super exciting. I wish I had a video! There was a photographer in attendance selling prints right on site, and Molly's weaves were so lovely that I had to buy a photo of her happy face finishing them and locking onto the finish jump. 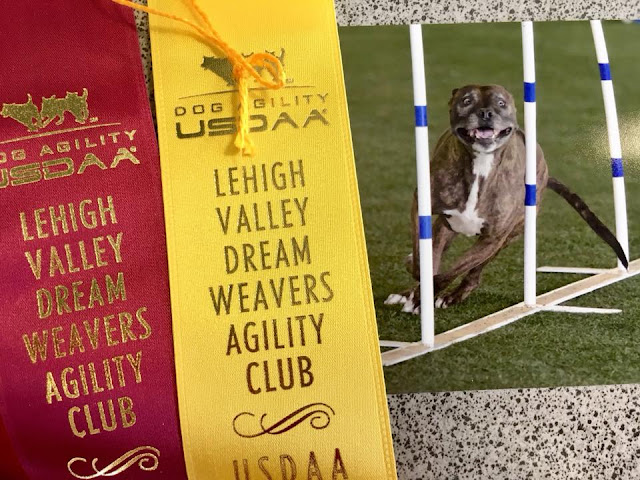 This weekend was a full weekend, as we were attending our own agility club's trial. So lots of extra work detail for me, longer days and less time spent hanging out with the dogs. But it is fun! I love our club's trial weekends and on Saturday we had a picnic afterwards and Perri got to hang out on my lap for a little while, and she loved it.

Molly put a ban on weaves for the weekend, sigh. And that made me feel bad. We started with Gamblers (that's the video below) and I really enjoyed our opening (and I made sure to give her a little distance to get up the Aframe.). I knew we weren't getting the distance weaves in the Gamble and I decided I would ask for it one time and move on with life if she didn't get it. I'm a little annoyed I said the cue word "Weave" as I consider that poisoned from our stress days. I get so mad at myself!
Standard was going great and then I misjudged her commitment to a jump, moved to my next position. She missed it. She knew it. And then the weaves were next. I asked her to repeat them and the third time she did but...she wasn't feeling the love.


The next day she had a lovely opening in Snooker and was doing great in the closing but she said "No thanks" to the weaves and we got whistled and left! In Standard we just had one of our runaway train snowball clusterfluff situations including no thank you! on the weaves but I ended the run on her running Aframe to a tunnel (the wrong end of course!) and so she felt happy about it all!

Molly says it was a great weekend because I got her a fancy new tug! We have been using this toy from Chuckit since I wanted the crack!ball! for Molly, but with a tug on it. However the strap is very abrasive and often makes her gums bleed, and the strap is way too short for comfort and I often get nipped when she regrips. So, I've been wanting something longer. The ball is by Chuckit, although not the crack!ball! Molly loves it! 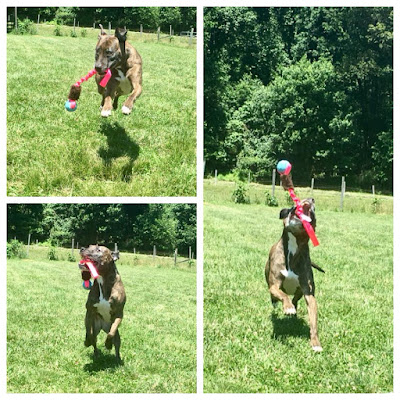 I have to do some more reflecting on the weekend but I felt pretty sad about Molly's weaves. Somebody even told me she looks "scared" of them. I don't disagree. It has been a while since we have done any fun motivational weave training at home, between Molly's lameness earlier this year and her subsequent toenail injury. Our team trial/weave stress really crept in this weekend. I really don't want to embarrass Molly, as a 9 year old dog still out running agility. We have a trial in July and I decided I will not run Standard with her that day, just Jumpers and Gamblers. I would love to earn Molly's Master title but if this is truly "it" for the weaves and Molly would be happier running courses without them, then I will accept that. Given the beautiful set of weaves Molly did just last weekend, I think that this was simply a busy month for an old girl and she needs some time and motivational work on her weaves. I'm in, for either way Molly needs me to take her.
Posted by dogbird daily at 6:19 AM