I am so excited to introduce the newest member of our family, On Target's Vigilante aka Zorro! Zorro is a "sports mix", his mother is a whippet and his father is a "borderstaffy" (border collie x staffordshire bull terrier.) His birthday is April 26th and he is currently 9 weeks old. 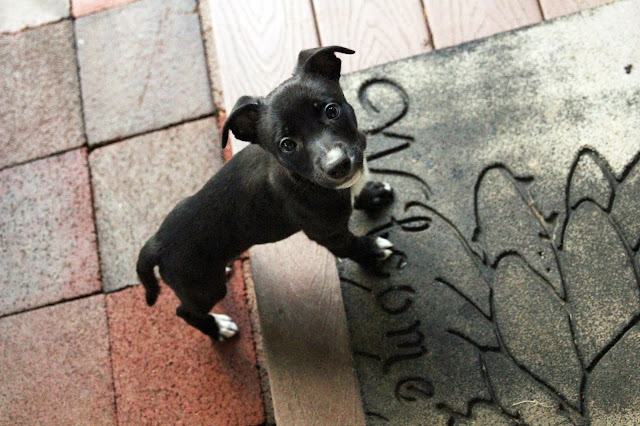 I flew to get Zorro on Saturday evening and we came home very early on Monday morning. I had big plans of slow introductions with the dogs. I was going to sleep out in the camper when I got home. I was going to crate him in there, let my own dogs out in the yard and love them up and then put the puppy in his ex pen for the dogs to discover when they came back in. Well, you know what they say about best laid plans.

In reality I was awake from roughly 530am on Saturday morning until 5am Monday morning, with a few hours of broken sleep stolen here or there on airplanes. I had an ambitious plan of See the Sights! Find the Geocaches! I'll sleep later! during my short time in the Las Vegas Nevada area. Fast forward to Sunday evening and Zorro wouldn't be quiet in his sherpa carrier unless I was walking the airport while waiting to board, he thought grabbing paper towel balls and jumping in the toilet was more fun than peeing on a puppy pad in the airport bathroom, and our connecting flight got delayed by well over an hour. To say I was at my limit is a major understatement! By the time I got back to my car in the airport shuttle parking lot and on the highway home, I was literally hallucinating I was so exhausted. So by the time I got home I said I am sleeping in my own heckin bed and that will be that. (the camper bed is unbelievably uncomfortable.)

I got home, left Zorro in his Sherpa bag in my front seat and went inside and loved on my dogs - who I had missed very much in the short time I was away. I let them all outside, apologized to them and I carried the puppy out to them. Lots of sniffing and attempts to jump up on me and see the puppy. Everybody was very curious but as tired as I was, I had no desire to stay awake any longer. I put the puppy into the crate I had set up beside my bed, turned on a white noise app setting on my phone and...he predictably started shrieking and the girl dogs all were leaning over to stare at the puppy making all the noise. Perri even gave some grouchy barks! I kept asking the girls to lay down and they would not so I finally lost my temper and yelled at them to lay down! And they did! Perri kept tapping my shoulder with her paw though, like she was consoling me. I found that Zorro would settle down and nuzzle against my hand if I put my hand next to his crate. That has continued all week whether in the car or at bed time. 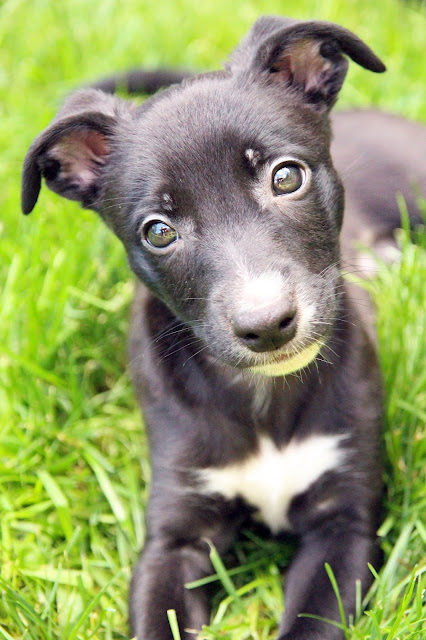 We got three hours of sleep. That was not nearly enough for me. We spent our first two days at home for the most part, with blessedly mild temperatures. I got caught up on house work, let the dogs all rotate spending time with Zorro in the yard and in the house. Everybody has been getting along so well. Perri has mixed feelings of wanting to play and being outraged by Zorro's very presence. Molly ignores his existence. Ein ignores him for the most part and has already given him several scoldings, which Zorro has respected and learned from. Ein is very fair with his corrections to puppies. 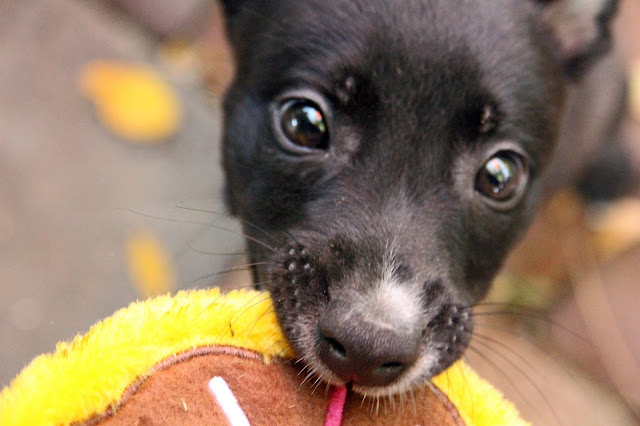 Zorro came to agility class Monday, but was sleepy and took in the whole scene from my arms and then went for a long nap.
Wednesday he had his first vet visit, 6.6 pounds with an appointment for his next Parvo vaccination scheduled. He had his first ride in the car crate and settled in nicely with the "hand nuzzle" assurance from me. Wednesday evening he rode along to our therapy dog visit and ate his dinner in the crate while my friend and I took the poodles inside the group home. He also hung out in a mesh front pouch pack my friend gave me and is able to nap or just observe while we take the big dogs for walks! 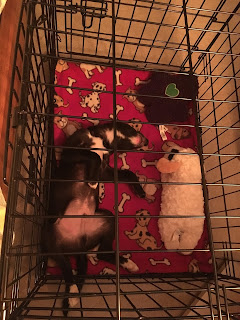 Thursday he came to my sister's house for the entire day with me since my 16 month old nephew needed a sitter for the day. I was so anxious about this because I knew I would have a lot to look after, proper interactions with a baby and three new-to-him dogs as well as respecting his potty training schedule all the while keeping a human baby safe from harm! But we made it through. Zorro took a lot of naps throughout the day in the front pouch pack I was given and that was such a blessing! By the end of our time there he was playing tug with one of the resident golden retrievers, what a bold pup! 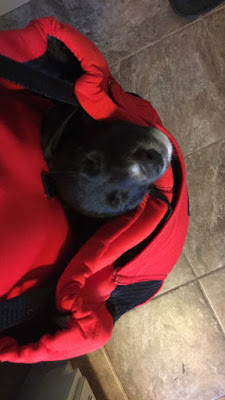 Friday we visited our agility trial friend Donna and her two adult dogs, we visited my work friend Steph and her adult dog for lunch and went for a little walk, again with Z in the front pouch. And then we visited Vince's aunt for coffee and cake and Zorro took a big long nap the entire time I was there. Z did wonderfully with all of the people we met, as well as the three adult dogs. Donna manages her dogs well, and Steph's dog Bridey is has an excellent sweet temperament towards other dogs. Perfect for a puppy. 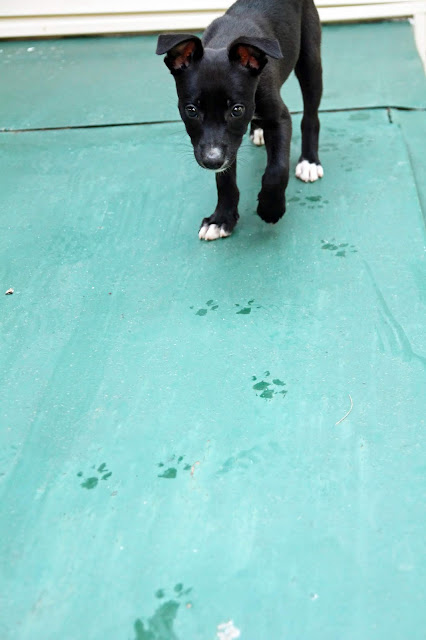 And Saturday Zorro came to a Nose work trial! I was very nervous about this because Zorro vocalizes pretty intensely when confined behind any sort of barrier. All throughout the week we have been working on rewarding quiet, rewarding being behind barriers/ in crates. But on Saturday I knew it was going to be in the crate and I was going to take whichever dog was working a search and go. That would be that! He was quiet and slept the whole 85 minutes there. He got to come out for potty and the general briefing and meeting lots of people, he loved every body! And then back in the crate for Molly's search. There was some rage screaming but when I returned, he was quiet. And all through the morning I gave him little exercise breaks and he was content to crate nap after that. We went to a lake park on our way home for the girls to swim. Zorro was nervous to go into the water but if I went in, he swam right in after me crying and whining the whole time. Not thrilled, but brave! 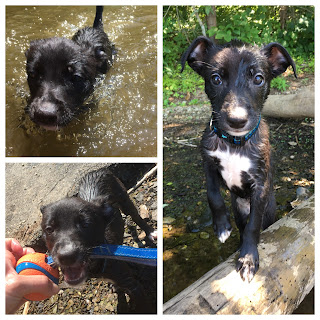 And today, Sunday, is our last day off of work together. Zorro has been doing scary amazing with potty training, he loves to tug and gets more intense every day, he is very food motivated and enjoys what little training we have done so far. (Clicker intro, 4 paws in a box, baby wobble board, tunnel, sit) Our biggest issue is the barrier frustration. He is very vocal and very persistent. Since I have dealt with SA in Perri I do not believe that is what I am dealing with, it truly seems more like frustration that true panic. And it is understandable, he has been through a huge change in one week. Knock on wood, since adding a Treat and Train into the ex pen with variable reward, Zorro is thrilled to be in his ex pen and not feeling so frustrated about my walking away. I am proud of how well he is settling in. I am proud of how my adult dogs are handling the change.

We are very excited for Week 2 of Zorro. 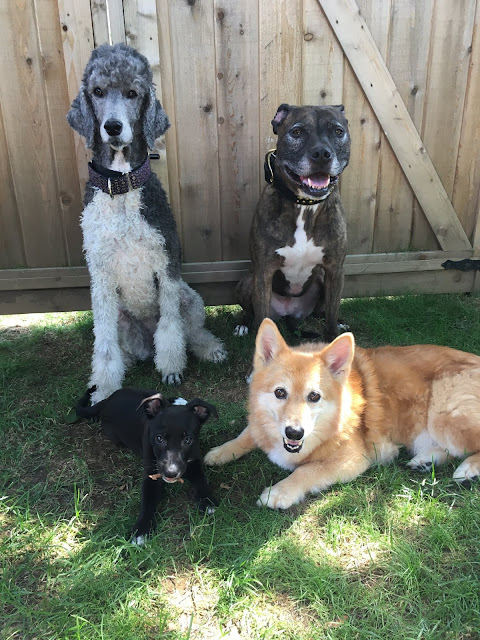