Since the almighty Facebook is experiencing some sort of outage today, it is a good night to get caught up on this poor neglected blog. February was a blur with the only trial after my prior post being a CPE trial to gain points toward's Ein's 1000 Point Level title. Ein is now standing at 970/1000 points and set to finish the title this weekend. We have "only" been working on it since 2013 so maybe it is time to wrap it up. 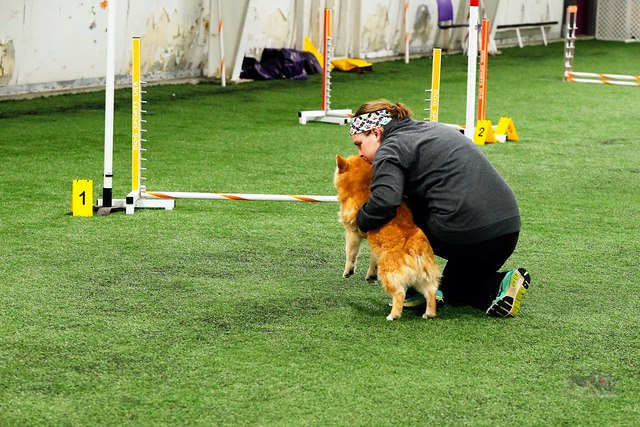 Speaking of Ein, March 3rd was his fourteenth birthday. 14!!
Einey is definitely slowing down. He is clearly showing the beginning signs of "canine cognitive disorder" aka doggy dementia. It is most noticeable overnight. He will pace up and down the stairs or lick his paws and/or bed obsessively. I added 3mg of melatonin to his evening meal last summer and for a while it was peaceful sleeping at night again. In the last month though, the melatonin has not been enough. CBD oil is the next thing I am going to explore for Ein. Other than that, the old boy is holding together really well! He can act pleasantly and happily vacant sometimes. He still comes on hikes, although he "pays for it" with arthritic pain and stiffness more than ever. But he so adores his time in the woods. His deafness is worsening. I have to use hand signals to recall him in from the yard and I have to yell his name if I want him to come from another room.
He still loves carrying his Benebones everywhere, biting the puppy as needed and being a happy little busy body. 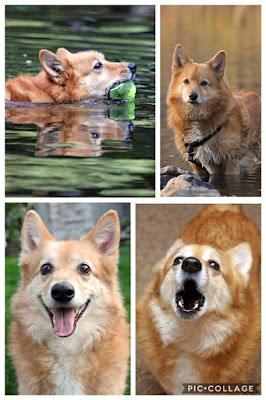 And guess what else happened on March 3rd? I took Zorro and Perri to a WCRL Rally Trial and baby boy earned his first title: Rally Level Intro! He had two rounds of Intro with lovely heelwork and attention. He couldn't resist one moment of trying to "wrap" a sign and then sniffing it - which he sometimes does in a new location. Otherwise a really lovely job and he had such a good time in the ring. He enjoys himself so much and we are going to have so much fun together. I also learned that you can reward at front position and finish in WCRL in the Intro Level Only. I think that's a great rule for the Intro level and I felt like it was a great support for my young dog. 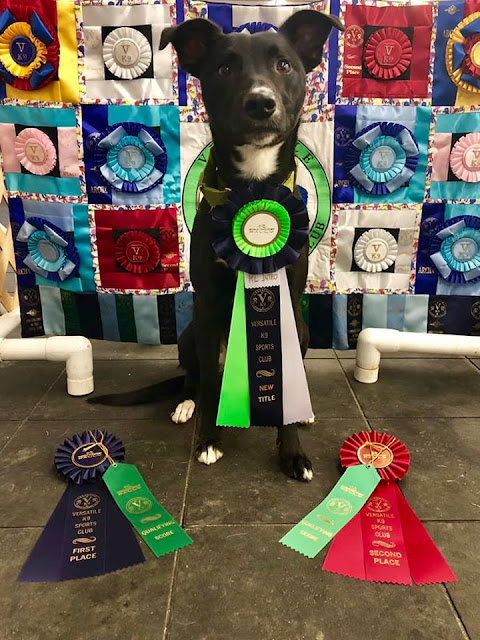 Perri had a great attitude for her first time at this trial site (new to Perri! Only Ein has trialed in this ring before.) She blew me away with a perfect 210 and first place out of a 20 dog class. When she is on, she is on! Level 2 she was not quite so confident but we still put our fourth QQ in the books towards her ARCH.

Perri also turned 7 this past Saturday. I am kind of amazed that she is already 7 years old. We are worlds away from where I thought we would be by this age in performance sports but I can truly say this year.: that's all right. Whatever. I have Perri's medication situation figured out, for now and hopefully forever. I am so much better at supporting her and understanding her. She loves her puppy and he makes her jealous and takes the pressure off of her simultaneously. She is my best hiking and adventure dog. I am so proud of her strangeness, I love sharing her eccentricities with people. She is a goofy unique martian of a dog. 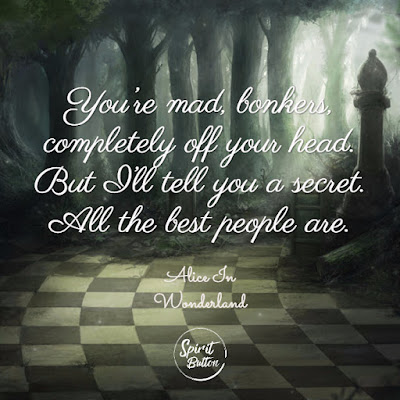 Posted by dogbird daily at 6:38 PM