A friend of mine recently did an Embark DNA test on two of her mystery mutt rescue dogs, and I felt inspired to do one on Molly! I've always called Molly a "pit bull". She was labeled "pitbull" at the shelter and she certainly has all the looks of one. Over the years I wondered if Molly's taller/lankier and not-so-stocky build was evidence of another breed mixed in there. I always thought, maybe boxer. 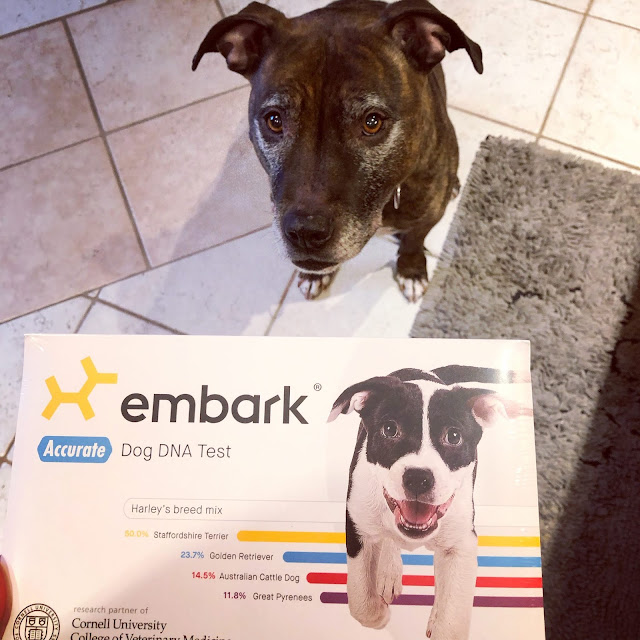 The Embark process was easy! I purchased the test directly from Embark. It was $189 straight up but I had found a coupon code for $40 off and away we went. I had been waiting for a deal and that seemed to be a decent chunk off the sticker price. The kit arrived in the mail a few days later. The instructions could not have been more clear and user friendly. I waited a half hour after Molly had had food or treats of any kind, and I swabbed her jowls with a swab and mailed it away.

Embark is lovely with communication. They let you know when the swab is en route, arrived, as well as updates through the testing phase. Embark tests for 170 genetic diseases and I received an e-mail that those results were ready first. Molly is clear for all of those, but she is a carrier for PRA (Progressive Retinal Atrophy.) Not a concern since she is spayed and certainly not being bred.

A little over 24 hour after receiving the health results, the breed results arrived! 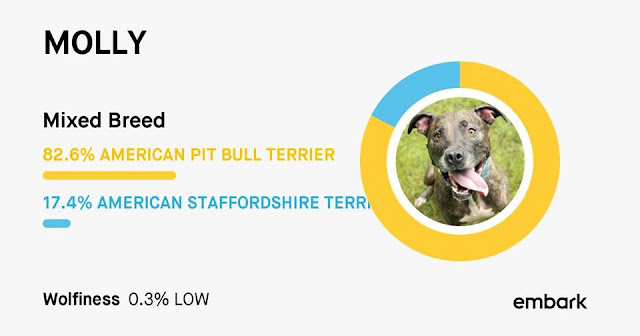 No boxer! I can't say I'm totally surprised and it sure was fun finding out what really makes up A Molly. (And by the way, the photo on that Embark image above was not uploaded until after we got the results.) I have to say I am the tiniest bit tempted to buy a test for Ein to see if he really does have any pomeranian in his make up. And also for Perri, mostly for the genetic health testing. I obviously already know what breed she is. The owner of Zorro's brother did a test on him (for the health testing results.) and he was clear for all 170 diseases. The breed make up was spot on. That made me really trust this test!

Here is a link to Molly's full public results. There was a small bit of me that was hoping that somehow the owners of Molly's brother had done this test on him. Because Embark also matches relatives. Backstory: Molly and her brother were strays. A couple adopted both of the 2 month old puppies at the same time and returned Molly a week later. On the day of their resurrender, I walked into that shelter looking for a young pitbull. I saw the couple crying and filling out paperwork. I saw the two puppies and was told by a shelter working that one was being returned. I so hoped it was the dark brindle brown female puppy that was being returned. Because I wanted her. It was. I always wondered about her brother. If they kept him. Do they still have him? Is he still alive? Does he have lymphoma too? What does he look like?
Posted by dogbird daily at 6:28 PM