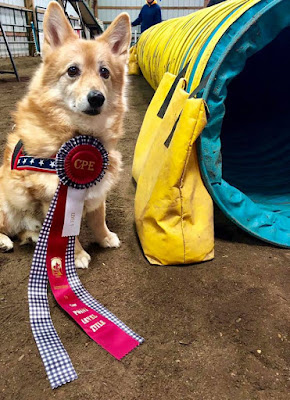 It was a huge day for Einey because he finished his Level 1 Specialist 1000 point title in CPE Agility! We went into the day needing 30 points. To explain this title, every qualifying round that you earn in any level is worth a certain amount of points.
Snooker and Jackpot are 25 points. A clean Standard round is worth 25 points. You lose points if you have faults. Wildcard and Jumpers are 20 points for clean rounds. And Colors is 15 points. You need 1000 points to earn the Level 1 title, 2000 points for Level 2 and so on.

So, Ein debuted in Level 1 in 2013. He finished the level entirely in 2015. (Two Standard legs and one of each game.) And all this time we have been earning Qs and points. I was very hot and cold all the while. There would be months at a time when we wouldn't play any agility. Ein would have a day where he didn't seem to be enjoying agility so I would give him time off. And then some times he would be so strong and happy and I would enter him in his max of 3 runs per trial. Never more than three! Ein has always been rockstar consistent. He never takes wrong courses or bars, he rarely NQs. When we started, Ein did all obstacles except for the teeter and weaves. As he grew older he started refusing the dog walk and eventually the A-frame. In most classes we could easily avoid any obstacles except for jumps and tunnels. Every now and then they were unavoidable and we would have to scratch or NQ.

We went into today with 970 points. (We honestly had 990 but there was a clerical error and one of Ein's Jumpers legs was scored as a Level 2 Q and CPE unfortunately would not move it to Level 1 for me so that the points could be applied to his title.) It was ultimately my fault for not reading a trial confirmation closely enough.

Anyway! Ein earned a Jumpers and Colors Q leaving him at 1005 points and earning his title! Ein has really enjoyed the majority of his runs on his journey towards this title and I am so happy to have earned it with him. I never imagined he would end up enjoying agility this much. Ein is officially retired from all performance sports now.


Since I was already at Flexi with Ein, I entered Molly in Jumpers and Fullhouse. We also ended up adding Standard. (Ein was entered in a second round of Colors and the wonderful trial secretary let me switch dogs and run Molly in Standard instead.)

We ended the day with Fullhouse. And with that run, Molly is also retired from CPE Agility. All of my dogs are now. In February 2013, at this same trial site and under the same judge, Molly and I had our first agility trial. We NQd everything the first day. The second day we walked in the ring and played Fullhouse. I have no video. We had the exact minimum amount of 19 points required to qualify. It was our first Q together. And so today, at the same trial site under the same judge, we ran our last CPE Q together. It was a perfect last CPE run for Molly and I. And there were lots of tunnels and no weaves. Everything my girl loves. We had 36 points.

Posted by dogbird daily at 6:12 PM