Wow, an update just after a thing has happened. Like the old days! 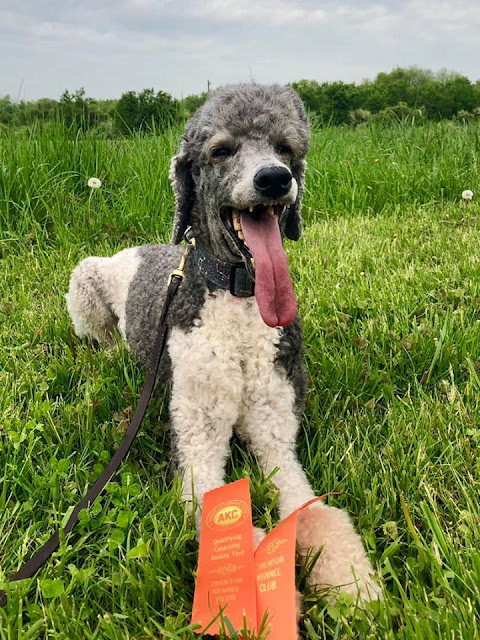 All through the winter I have been eyeing up CAT season for Perri. After she became avoidant of capture at the end of her last Fast CAT run a year ago we took a year off (mostly due to other pursuits and having the puppy). This winter I came up with the plan: get Perri's CA title where she could enjoy coursing 600 yards with nobody trying to capture her with a slip lead. Return to Fast CAT and have somebody she is familiar with release her, leaving me available to be in the catch pen for Perri. No slip lead, just her leash to clip on.

Yesterday was the beginning! I entered Perri in two CAT trials and she easily earned her first two legs towards the CA. No avoidance of the end of the 600 yard chase. I was telling my husband that it was kind of cool to show up and have Perri be at the top of her game. Usually whatever we do, Perri is at the low end of performance and I am happy to support her and grateful for what she offers. But at CAT, Perri is admired both for her beautiful appearance and athleticism and also for how good of a job she does coursing the lure! And she is 100% enjoying herself, even more than a hike in the woods! This is the first time I have ever sat down and actually watched a good chunk of the CATs, prior ventures have been peppered with agility and fast CAT conflicts. I was surprised to see that not all dogs are Bag Brains. :)

That is okay, but my dog...is a Bag Brain plus! There were three other standard poodles there (our friend Zoe being one of them) but Perri was the Noisiest Poodle for sure!


Next up.... CA title and return to Fast CAT. Perri cannot wait!
Posted by dogbird daily at 4:14 PM