Last Friday I started a five day road trip with Perri and Zorro. The goal? To give some love to my neglected goal of visiting all of the Pennsylvania State Parks. When I decided to visit all of the parks, I was always daunted by all of the parks on the western side of the state. 4-6 hours away at least, that's not just a day trip. In December 2017 I started drafting a road trip plan that would knock them all out in one go and I refined that plan to perfection. Yep, that's right! In the end, I visited twenty six PA state parks over the course of the five day road trip. Wow! It took careful planning and zero "fly by the seat of my pants" behavior, as I am normally prone to. :)

We started Friday and logged a good three plus hours of travel time before hitting the first park: Laurel Hill State Park. The park was pretty quiet on a Friday and the main attraction was the park's lake. I found a much needed restroom, parked by the ranger's station and did a quick multicache featuring the Civilian Conservation Corps (CCC). And then we were on our way! 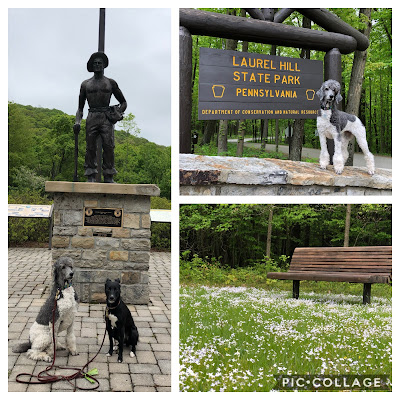 Next was Kooser State Park not far down the road. Kooser had a small lake with a dam and one trail on the opposite side of the lake. I hiked the trail to find a geocache, it was a little less than a mile. On the way back I saw a little peninsula/jetty jutting out into the lake that you could walk and fish off of, I liked that! 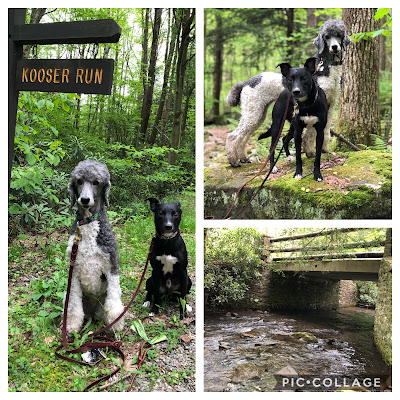 From Kooser it was time to head into the Pittsburgh area, and there were two state parks to be visited there. This was a little frustrating to me because I had tried to visit both parks when I went to Ohio for CPE Nationals and failed miserably, due to lack of planning and knowledge about access points.

Allegheny Islands State Park was first and this park is literally two islands in the middle of the Allegheny River. That's it! I had to content myself with viewing the park from the shore line. (The last time I tried to "visit" my GPS gleefully took me over a bridge that was over the top of the islands. Uh, thanks?)

Point State Park was next, situated at "the confluence of three rivers". Once again, the last time I tried to visit this park there was an art event going on there, I could not figure out where to park and I accidently exited the city while I was trying to figure it out. (I then got the joy of sitting in gridlock traffic inside of a tunnel.)
So, this time I was back and I was not taking no for an answer. In case you haven't noticed Planning was the theme of this trip. I discovered while researching that there is one parking lot near the state park and you have to pay to park there. Okay, fine. So I headed into the very congested city traffic thinking things would be fine. Well, that parking lot is nestled right in between a one way lane heading to a one way bridge out of Pittsburgh and a different one way lane heading to a one way tunnel heading out of Pittsburgh. There is only one entrance to the parking lot and it is not marked well. Guess who not only took the bridge out of the city but also the tunnel. It was at this point I wanted to cry because, I couldn't take no for an answer and rage drive out of Pittsburgh this time. I was going to visit the $%^$&!! Point State Park and check it off my list! Back into Pittsburgh, back into the rage inducing city traffic and I finally figured out how to get into the freaking parking lot, paid my $7 and the dogs and I were off! 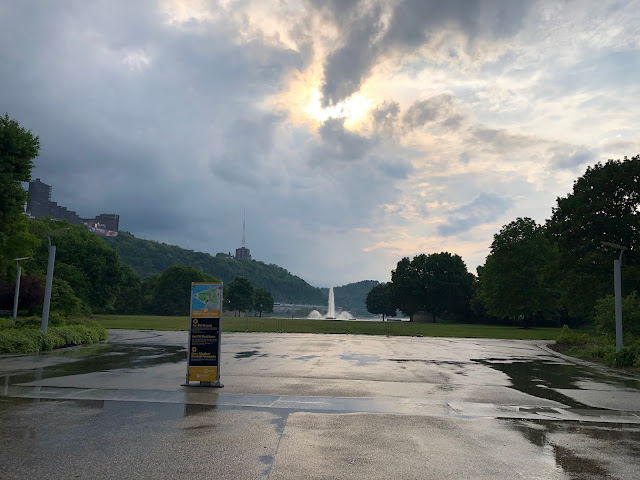 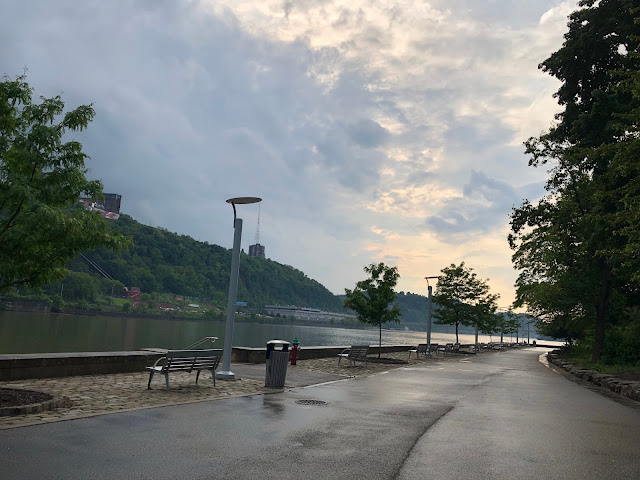 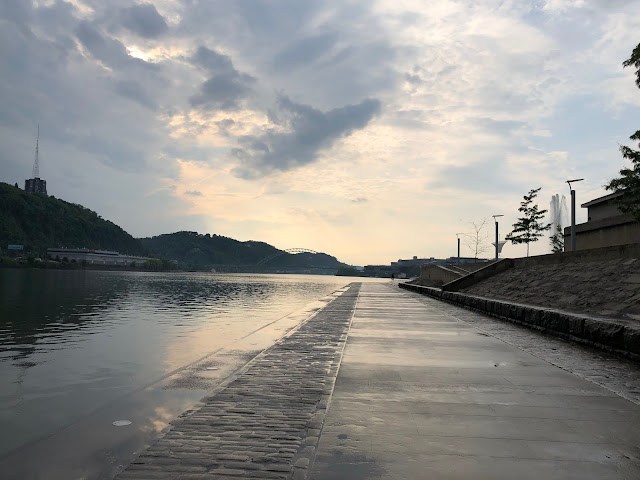 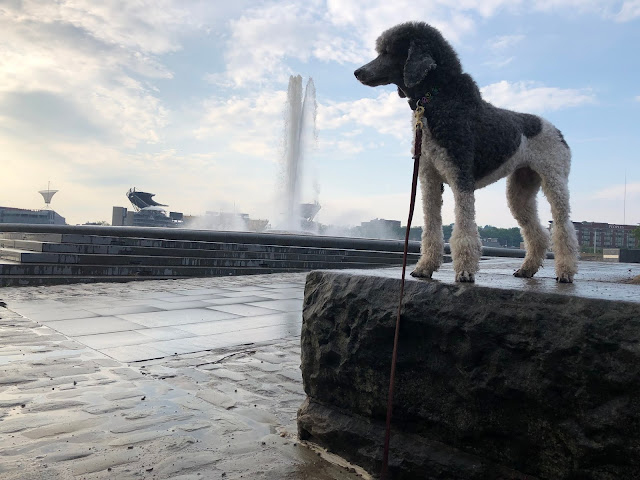 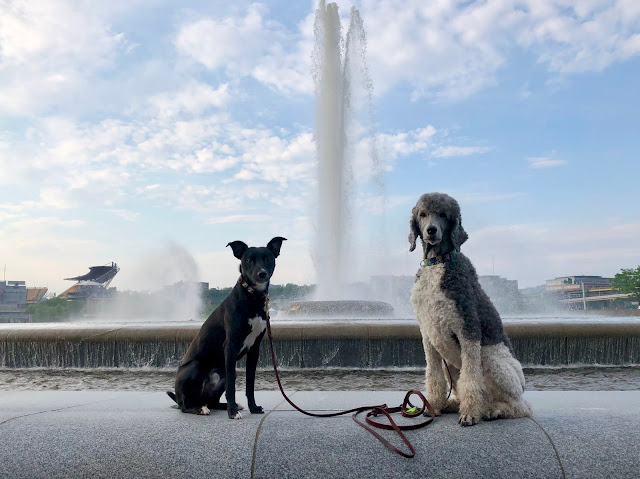 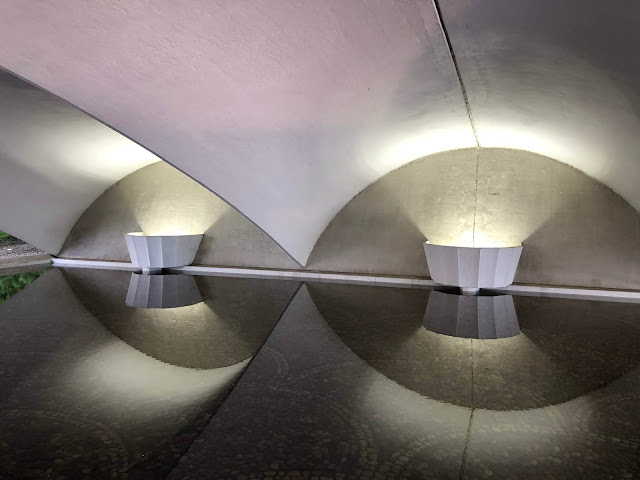 The park was actually a really cool city park and of course my favorite part was the enormous fountain right at the "point". I walked around the whole park, stretching my legs and blowing off the stress of traveling there.

After that it was out of the City towards Hillman State Park. This park was unusual in that it was pretty much a Gamelands with a state park label. There were no facilities, day use area, or any of the normal "state park" things. It was even marked as Gamelands. You could certainly hike there, but then, you can hike in any of the Gamelands in PA. We drove through and by now it was absolutely pouring rain. 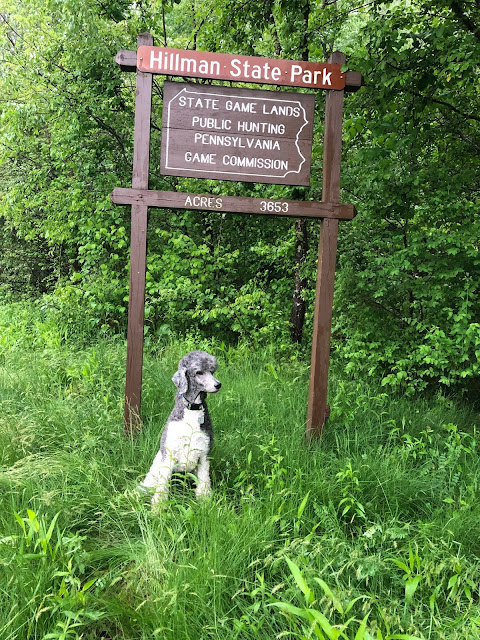 We arrived at Raccoon Creek State Park and it was still pouring. I also thought I might see somewhere nearby for dinner but there was...nothing. I checked in at the camp station and went to my campsite. Thankfully it was still daylight. I put the dogs on their tie outs and set the tent up, in the rain. The inside got damp before I put the outer rain proof cover on. I had purchased an air mattress for this trip since it was only eight dollars and I already had a hand pump so, cool! Not cool. The hand pump would not inflate the air mattress. I tried everything before declaring, to myself, because you talk to yourself when you tent camp with two dogs, that I needed to leave this task alone for the night. I got a shower, ate a Larabar and went to sleep early for the night. On the gravel. Because that was where I put my tent, thinking it might stay slightly drier there than on the grass. 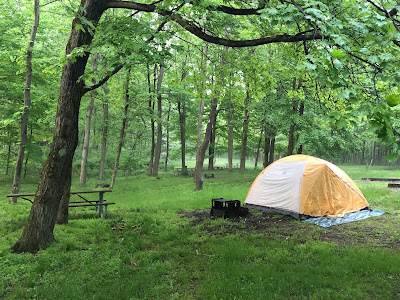 Better and less frustrating days ahead...
Posted by dogbird daily at 8:03 PM