Intermission from road trip posts (there is one more to come on that subject!) to write about our great weekend of various AKC events and fun!

Molly and I had our first try at AKC Scent Work on Saturday. I entered her in Novice B Interiors, Containers and Buried. I also volunteered for the entire afternoon trial (volunteers were given priority entry and I thought that if I gave my time for an entire trial, I might be more likely to get in!)

Interiors was a small search space with a lot of clutter. Tough on the leash handling. Molly flirted with the judge and then wasted no time shoving a small cooler two feet across the search area. Alert! I am glad we did not get a fault for that.

Containers was next. We have done agility in this barn, quite a bit of open training and some trials. Molly always gets a little environmentally overaroused there. Today was no different. As we walked across the platform and made a right to the next search area she was squeaking and getting "buzzy". i don't know how else to phrase that. By the time we got to Containers I knew I was in for some trouble. I tried to do "zen hand" at the start line. It did not help. Molly did not even wait for my search command before blasting into the container search and flattening the first box she got to. I thought, "Well, was that an alert??" And now I was embarrassed she ruined a box, worried I was ignoring an alert... I asked her to continue searching. If it was the hot box, she would alert on it again. She godzilla'd down the boxes and then completely annihilated one, smashing and clawing it. I called alert on that one and apologized over and over. She was really on a roll! Ugh! We did the pass the search though. Whew!

Buried was last. Now I was super nervous Molly would tip the container of sand over. Buried is a whole new search element for us and we had only practiced it twice. With soil. There were 6 identical plastic totes full of play sand and in one box the hide was buried two inches deep. Molly searched every box but looked at me after each box she sniffed. That is new behavior for her, she wasn't entirely confident in the search. There was one box I noticed her lingering on more and I made a note of it. When I brought her around the second time she again lingered there and as soon as I saw a paw coming up I sort of body slammed her off the hide and called alert and fed her. I also fed her the whole way back to the car. Molly is confident enough to handle being pushed away like that, but no way was I going to let her topple a huge box of sand and ruin the search area and hold the trial up! 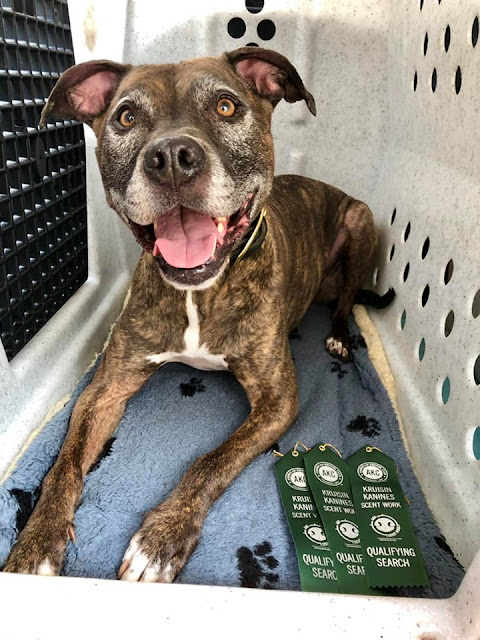 Today, Perri got her day and we spent it doing CAT and Fast CAT! We started the day with her third CA leg and earned her Coursing Ability title. And then Perri returned to Fast CAT, this time with my friend releasing her. No scary people in the catch pen! She ran 24mph for the first run and 23mph for the second run. Perri's personal best is 25.65MPH so, no beating that today but I was very pleased that she followed the lure all the way down. No bailing! I believe that brings us to 93/150 points for Perri's BCAT title. 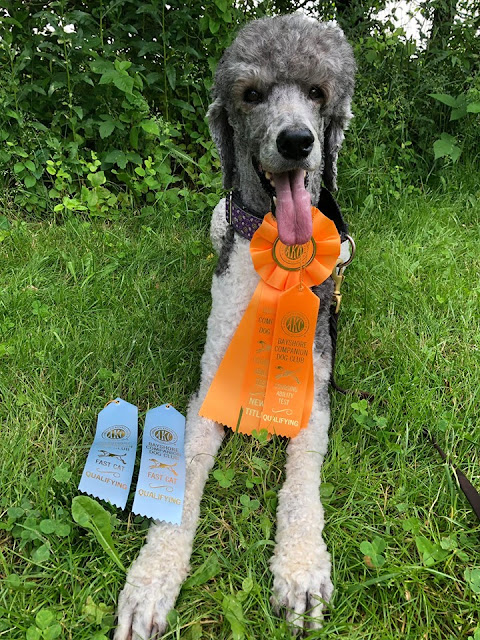 While my friend and I were finishing lunch and waiting for the afternoon FCAT to begin, I saw the huntmaster from the CAT out of the ring and with a handler and her rottweiler puppy. She was doing a trick dog test! When she was done I asked her if she would be willing to do a Novice Trick Dog test for Zorro and she said absolutely! Zorro did: Jump through hoop, go through tunnel, sit with hand signal, kennel up, nose touch, spin in a circle, go into a box, climb on top of a box, two paws up, jump into my arms from the ground. It was super fun and a nice little unexpected "cherry on top" of a very fun weekend! 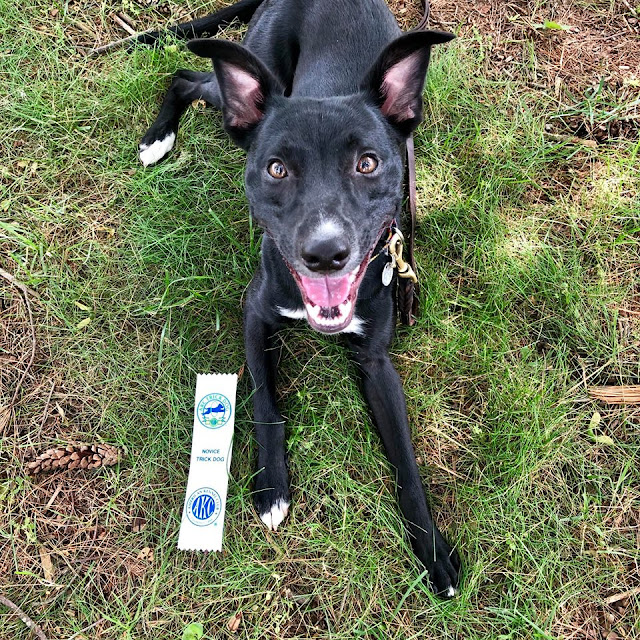 Posted by dogbird daily at 7:27 PM