Today Molly and I ventured out in the freezing cold to play some more AKC Scent work. Today was only our second trial and the hosting club was offering: Handler Discrimination, Buried and Containers, two trials per day. I have not trained Handler Discrimination with Molly but I did enter both rounds of Containers and both of Buried.

This trial was run a little differently, and the dog did back-to-back searches. So, Trial 1 was our first search and Trial 2 was several moments later and a different search. We started with Containers. Molly and I have been focusing all of our Nosework training on polite alerts and respectful searching. No smashing the box, please. It all went out the window today. She flew off the start line of Trial #1 so fast I could barely keep up, sniffing the boxes at lightning speed and came to the hot box with a paw smack and I called alert! I thought, "okay! that was good, she didn't smash it hard, just a little bit. something sunk in."

We went to the next search which was on the dirt footing of the agility ring. Let that sink in. Ugh!! Insane doesn't even begin to cover it. The next search was an embarrassing bowling alley. Boxes flying, a false alert, a box put up on its side, spinning and springing and then finally annihilating the hot box faster than I could even think. We got a fault for all of the destruction but we did pass and that was her Novice Container title.

Next up was Buried. Same thing, back-to-back. The first search was pretty quick! She alerted on the first box on the right and I hesitated a moment but did call it. Sadly the screen/grate on the container of sand was crushed through from her "alert" of perching on it with her front paws. She has never done this when we practice Buried, and my screens are even flimsier. Anyway, the judge said if I had called it faster it would have been a two second search. Ha!

We went to Trial 2, on the dirt footing again.... And she did the exact same thing. Alerted on the first box on the right. Now, I was really nervous. What were the odds the hide was the same place in both trials? What were the odds shenanigans were happening out on the exciting dirt footing and scene of earlier debauchery?? I....asked her to search the rest. And she false alerted on the sixth container of sand, right before returning to the actual hot box. The one she had told me about in the first place. I really did feel terrible, like I let Molly down. On the other hand, I was so absolutely fried doing so many container-type searches in a row with Molly and I guess I just wasn't reading her fact vs. fiction as sharply as I usually can. Sigh.

I feel embarrassed with how destructive Molly is with containers. Doubly so when a judge seems completely disgusted by the whole thing. I know that they have to replace the hot box and reset the search area and I truly do feel bad and Molly and I work on this. I don't just carelessly enter trials and ignore her behavior. The first judge today seemed to truly enjoy Molly's enthusiastic spirit and antics. The second, not so much. All I can say is that Proper Perri balances out the universe when it comes to Containers, she is so dainty and respectful! And now that Molly is out of Novice, Perri will get a turn soon. Well, at least the containers in Advanced will be a little more sturdy than cardboard.... 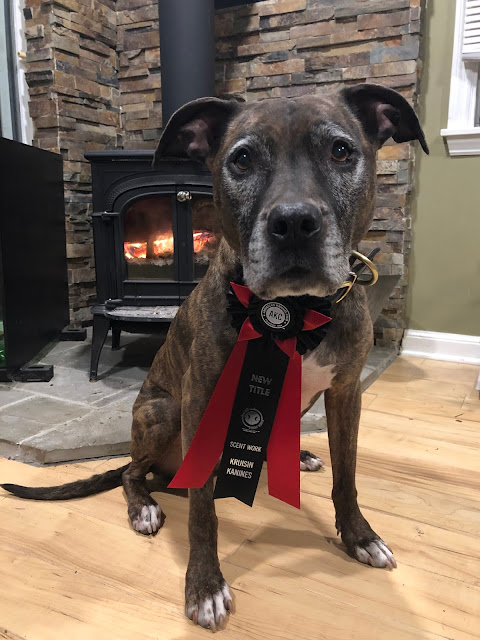 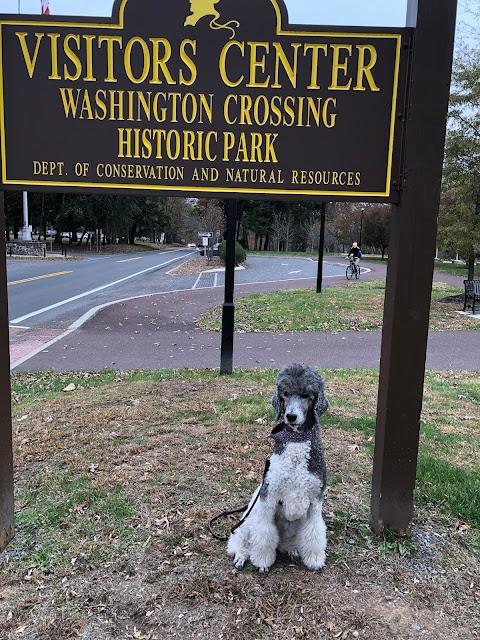 The dogs and I walked along the canal trail, we explored some hiking trails on the NJ side and then Perri and I did a nine-step Virtual cache through the historic area back on the PA side to end our day there. 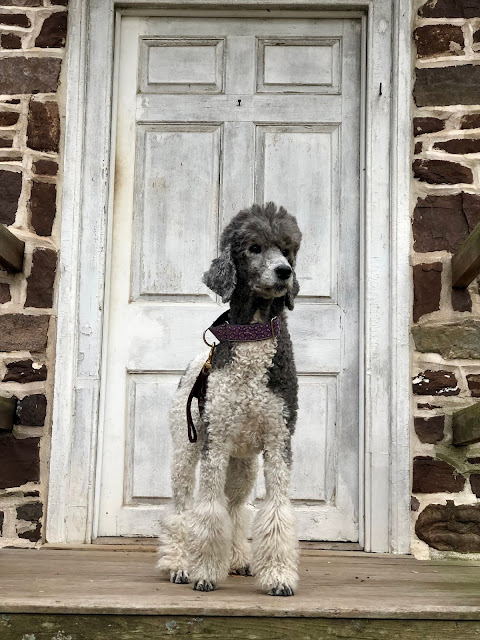 Posted by dogbird daily at 5:03 PM