This past weekend, Zorro and I played some CPE. I had originally not planned to do any CPE with Zorro, but CPE is perfectly set up to allow a team that is not quite ready for prime-time to get into the ring and run on some courses together. While I do feel this can invite teams to trial too soon, it can also greatly benefit new teams. It's all up to the handler.

CPE Level 1 offers Standard class and six different games classes, and none of them have weave poles or teeter required. Zorro has a fine teeter performance, but we have been taking much time polishing and perfecting his weaves.

After work last Friday we made our CPE-Wildcard-and-Standard debut! Wildcard was first and I was thrilled with Zorro's commitment to staying on a line of straight jumps. He is really showing independence as he matures, this used to be very challenging for him and we have worked hard on it.

Standard, we had two wrong courses. This is where I was proud of myself! I didn't yell his name to try to keep him away from the wrong course. I just accepted what I handled and "owned" where I not support  my young dog enough...and moved on.

The trial was offering five classes Saturday and Sunday each. When I first entered, I only entered Friday night. But the more I thought about it, the more I wanted to do a full trial day with my boy and see how we felt. I entered the full day for Sunday: Jumpers, Snooker, Colors, Standard and Jackpot (Non Traditional.)

We started with Jumpers and it was smokin' fast! I do not have a video of it and I so wish that I did, it was thrilling! Such confidence from my guy and the ending was a straight speed line with total commitment. The whole run was sub-20 seconds. Really exciting!

Snooker was next and I felt some hesitation after our second "color" but then he perked up as we started the closing! I took him out to the fenced in area outside for some fetch after that run. I am trying to be supportive of adjusting him to a longer trial day where he is the center of my focus.


Colors was next. Another one I have no video of, but I know it was a Q!

Standard was next and this time we did qualify! Such a bummer we did not Q on Friday night or we could have earned our Level 1 Standard title (And, completed Level 1 - with the Jackpot Q we earned later in the day.) Anyway, this run didn't feel great in a few areas but as I watch it again and again...so much nice stuff! I was confused as to why he hesitated on the top of the second pass over the Aframe, but I think it was because I said his target word while he was up there. I think I confused him, saying that before he had begun descending. And I collected him too tight before we began the closing line. And just before the panel. I do not think he has ever experienced a MAD panel jump. Wall jump, yes! But not this type of panel jump. At first I thought the refusal (not scored in CPE) was because of handling, but the second approach and refusal was confusion at the solid panel obstacle. Third time was the charm and Zorro did nicely in the ending!


We ended the day with Jackpot. We had to do a tunnel-Aframe-tunnel with a small distance challenge of about 5 feet away from each Tunnel. This was worth 15-points, and then Zorro and I earned more than enough points in our opening to qualify (for our Level 1 Strategy title.) Zorro did get to do the teeter, twice, and I also asked him for weave poles. He missed the entry but weaved nicely. I stayed back from my original handling point instead of escorting him to the entry. He knows his entries, but he is green. I was very happy with him! I did not need to ask him to weave, but Jackpot was a good opportunity to do so. I was also pleased that Zorro did an automatic down on the table in both Jackpot and Snooker. In CPE the table is never used as a pause table, but as a "stop the clock" obstacle in certain games. The dog only needs to hit it to stop the clock. They can bounce on and off, they can stand, sit, down. You may ask them for a behavior but only one time and if they do not do it, you need to move on and leash your dog. This is an area where competing in CPE is not supportive of my goals for Zorro, but that is the game! Fortunately Zorro does not have any table training issues and remembered his job. Yay!

We finished the weekend one Standard Q shy of Level 1 completion, with his CL1-H and CL1-S titles and a Perfect Day 5/5 on Sunday. Not bad, baby dog! It was truly a dream weekend and I am absolutely thrilled for our future together! Zorro is so mature and runs agility at trials with such focus. I feel his young age shows in carefulness as the day goes on (rather than zoomies or other classic stress behaviors) and I will see more stamina and speed as we go on together, and as I continue to support him and look out for his needs. We are going to have so much fun together! 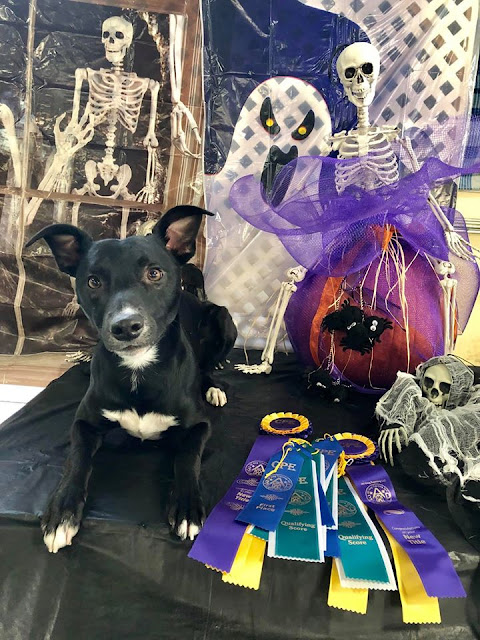 Posted by dogbird daily at 5:23 PM