This past weekend I had one of those "dreams come true" moments. My baby dog came home last summer. We have adventured together, trained together, fallen in love. I have patiently waited years. Three years. To return to one of my favorite AKC Agility trial sites: Dreampark.

The environment is tough. A three ring trial in a dirt footing horse arena. There are literal birds living in the rafters and they fly around through the day. It is noisy with dogs and people and a general din that never stops until days end. There is cat poop buried in the dirt on the edges of the ring. But I know my babydog, he could do it. My girls taught me everything that I know about environmental stress and acclimation. Zorro has natural handler focus, but that's not the whole picture. We have been working on this on every hike, every trial site visit, every walk, every outing since he has been a baby. It has been so very important to me. You get a dog with natural focus, but then you need to support and help that talent grow. Coming from erratic no-frustration-tolerance pitbull Molly, and worried about everything Perri - it was a major priority to reward and support offered focus from Zorro over the last year plus that I have known him.

I entered Zorro in Novice FAST so that he could get in the ring before we had to work on a numbered course. We ran the outside of the ring in a circle, earned 67 points in 13 seconds and Zorro's first Novice FAST leg!

Novice Standard was next. Video is below. I was a little disappointed I did not insist on 2o/2o criteria on Zorro's dog walk. He tried the "four on" on the teeter again but I asked him to meet his criteria. I don't want that slippery slope of poor contact behavior - thank you, Molly, for teaching me the importance of that! I did choose to not front cross in front of the weave poles. Not at a new trial site with a dog who is still growing his confidence on the weave poles. I did a messy turn on the flat to the pause table instead. It was fine, got the job done.


Novice JWW was next and same deal for the weaves. I opted for a turn on the flat after the weaves instead of cramming a cross in before them. A little wonky but it worked out. I am thrilled with his distance to the jump before the speed line at the end. I am trying so hard to let Zorro go do his job and not crowd obstacles. I am a work in progress! We also need a better understanding of "go on" when there is a straight row of jumps. We ran out of "go go go"s for that last jump. One refusal but that didn't take our Q away.


And we get to go back in two weeks! I am so looking forwards to that. The day with Zorro was a bit surreal for me. I have been so used to agility being about supporting my girls' mental states and the whole behavioral side of getting into the agility ring with brains semi-intact. Reactivity. Over excitement. Management.
Zorro has zero concerns in that realm. There is me, there is food, there are his toys and there is agility. Why worry about that other crap?

Brave new world for me. I am so grateful for this exciting journey we are beginning together. 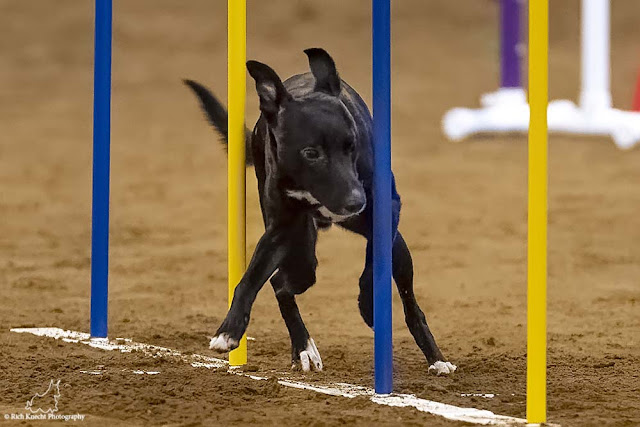 Posted by dogbird daily at 6:56 PM