Last weekend was the start of a pretty solid string of weekends that we will be spending at agility trials - how exciting!  We did a full weekend of CPE Agility with Flexible Flyers.   I was away all week long house sitting, so Molly was in Vince's care all week - that includes plenty of snacks, love...and not very much exercise!

Jumpers Level 5 started the weekend (Why not Jackpot?!) My concerns about being "doomed" by Molly being under exercised were...quite accurate.  I left her in the start line stay, one of the few areas that I completely trust Molly...and felt a 60 pound shift of very naughty brindle-matter hammering up behind me. She broke her stay!  She flew at the judge in pure joy and zoomed past him!  She took some off course obstacles!  Her butt was tucked in, her front legs were flying, her lips were peeled back in a shark grin of pure NQ Glee!  Somewhere in there, a bar went flying!   I am trying to change my frantic, flailing ways when Molly goes wild like this, so I tried my best to just hold still and let it pass.  It did.  She came back to earth and we ran the rest of the course rather nicely - but the 15 faults of our exciting lift off gave us an NQ. (We also got 5 time faults.  Zoomies and judge visiting take up a lot of time!) 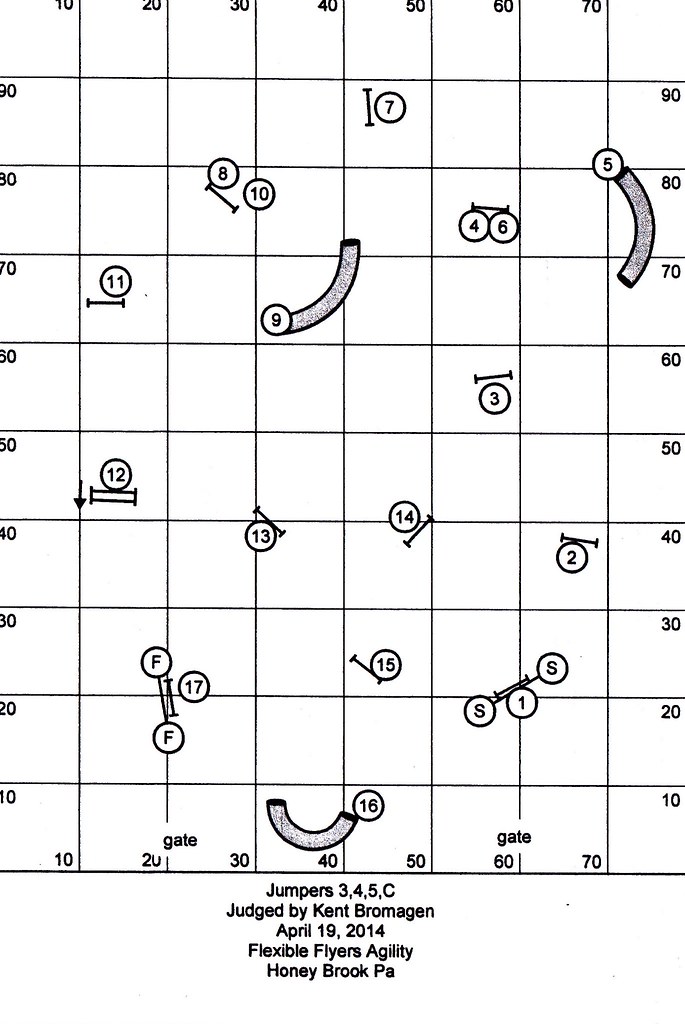 For the rest of the course, I decel'd at 7 and sent her to 8 and 9 from back at the jump.  Any forward motion on my part can send her off course, and I am trying my best to remember that.  After that a blind cross and another decel before 12.  Rear cross at 14 worked really well (I wasn't sure it would.) She also went nicely from 15 to 16 and took the correct end of the tunnel with no issue, and no steward visiting!

Next, Snooker Level 4.  Well after that explosion, I didn't know what to expect.  And what's worse?  The most flowy plan that I liked for this course included the weaves.  YUCK.  Molly actually ran really nicely.  Her weave entry sucked and we had to re-do it (both times.) but we survived.  I had a major idiot moment and when our opening was done, told Molly to go into the end of the tunnel that she had just exited.  (Sometimes I really really don't like myself!)  When I realized what I had done I yelped "WAIT!" just as her nose went into it.  Just her nose, not her foot.  She came right off of it and we finished the course.  Oh I suck so much but my dog saved my ass!!!!  I was so, so grateful to Molly.  We qualified with 42 points. 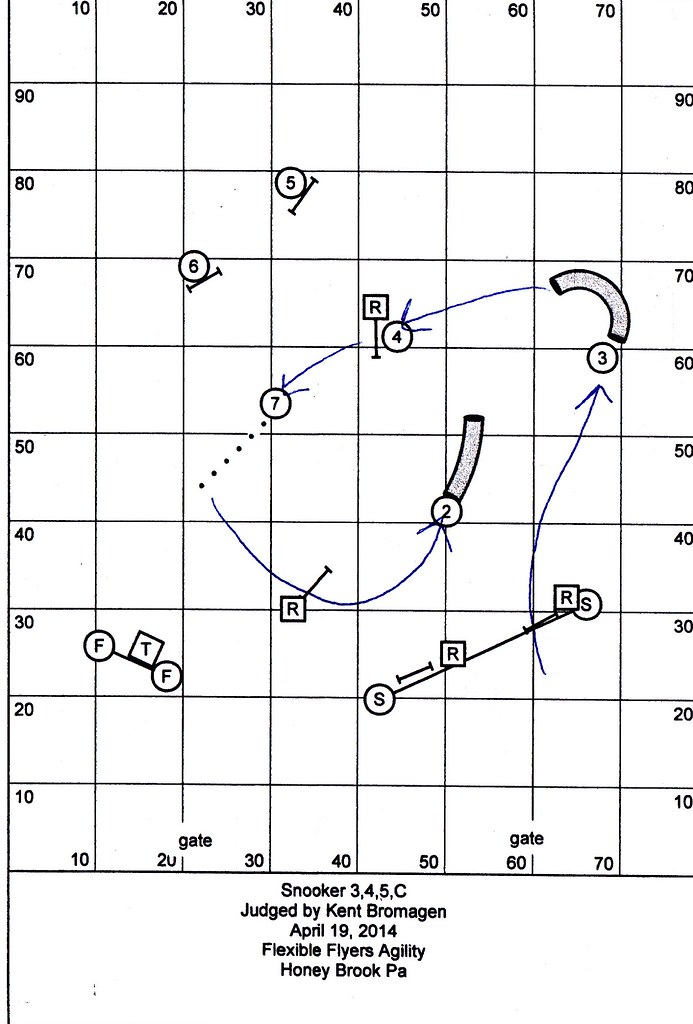 For the closing I sent her into the correct end of the 2-Tunnel and then got myself on the right side of it and called her to me.  Her eyes were for sure ahead on the off course tunnel, but early communication got her into the 3 tunnel entrance.  I blind crossed with just enough time and did not decel properly, so she went really wide after 5, out to the edge of the ring.  She came back over 6 and did her weaves (had to restart the entry, though.)

Next, Standard Level 4!  A lot of people were fretting about the discrimination in the beginning.  I really wasn't.  I used to worry about them a lot, but...well, maybe I have messed up discriminations with my handling so much that I am learning how to handle Molly towards the proper obstacle?  Who knows.  Anyway, we didn't have a problem with it.  She flew off the end, but did get her contact.  But there was a lot of snuffling around before going into the tunnel.  And then I was late getting to the exit end and there was a blast heading for very nearly the teeter.  Got her in the 4 tunnel and...though I watched many dogs get an off course coming out of that tunnel and taking the jump...I forgot to talk talk talk to Molly to get her coming towards me , because guess who got an off course coming out of that tunnel?  Me 'n Moo.  Just writing this out makes me realize that I was more than a little flustered with our disorganization in the beginning of this course, though - and it is no excuse, but I do have a hard time getting my mind back on track.  I got myself on the wrong side of where I wanted to be and had to run the course opposite of how I had planned, until after the 10 tunnel.  Everything else went smoothly, Molly does a fine serpentine sequence over jumps.  I love that.  No weave entry but once I put her in, she stayed in.  NQ for the Off Course. 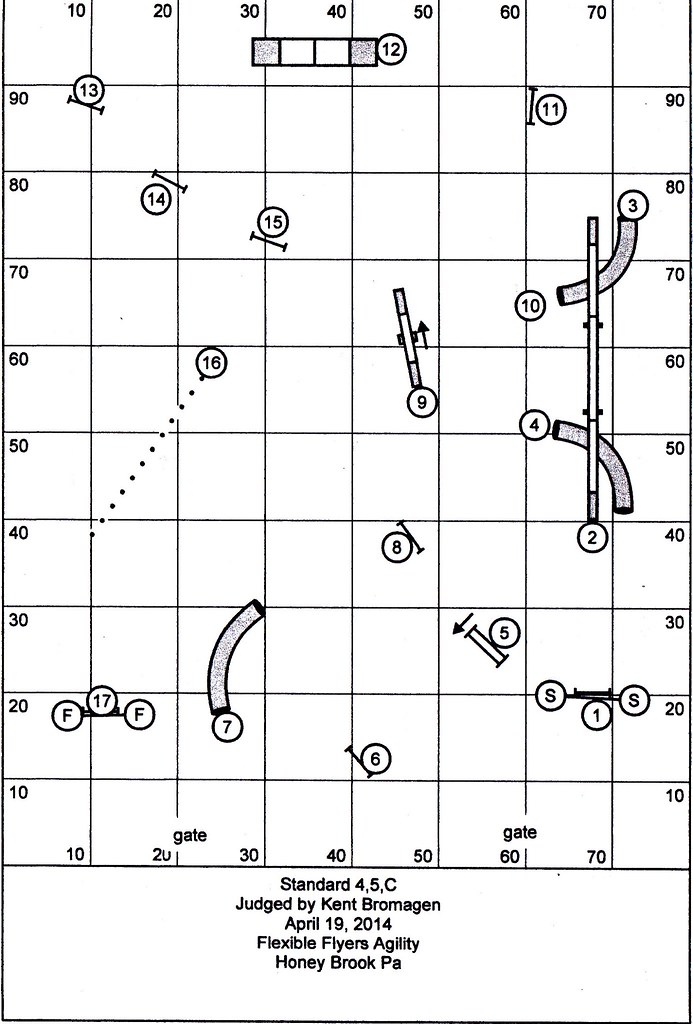 Jackpot Level 4!  Oh how I hate non traditional Jackpots!  This one was the "gather points and when the buzzer sounds, do a 5-point, 3-point and 1-point in that order."  Well, I've screwed that one up before, wasn't gonna do it again!  And we didn't.  I made a fun, loopy opening plan and we ran that and it was fun!  Just at the end Molly got stuck on top of the Aframe staring outside and then hurtled down it and took a tunnel after the buzzer - this was allowable.   Your gamble started when you took your 5-obstacle.  We took the Jump Combo, the Double Jump, the Bar Jump and had a nice table stay and qualified!  52 points!  Here is hoping our non-traditional Jackpot curse is broken? 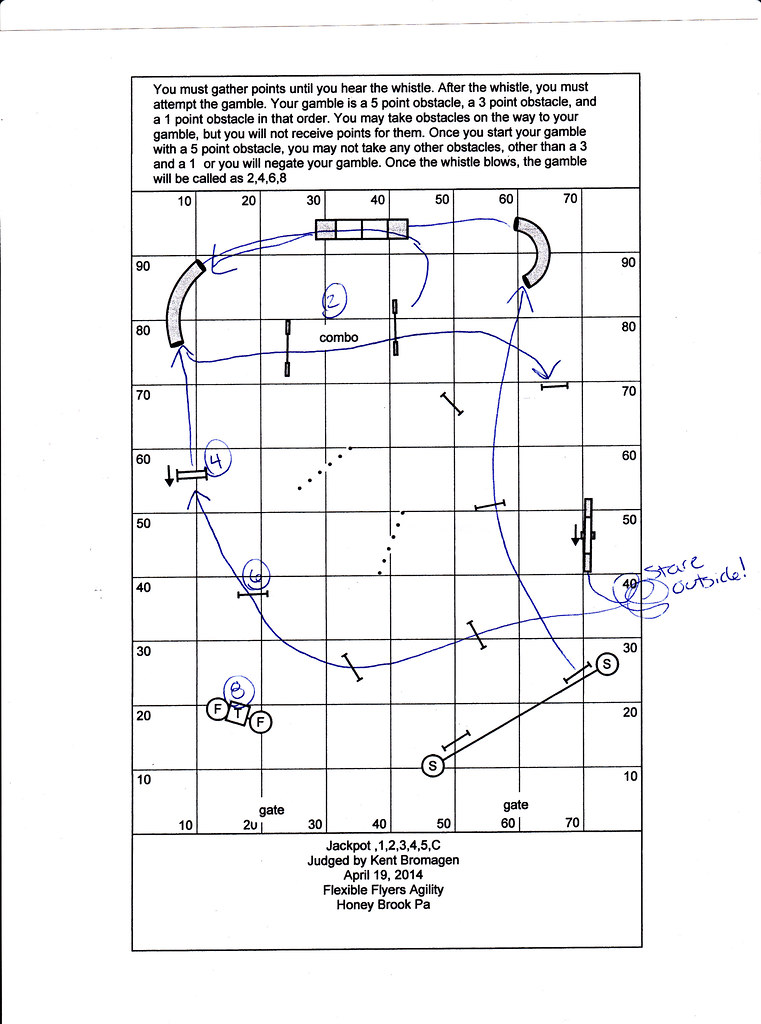 Fullhouse Level 5 I always appreciate a day starting out with Fullhouse!  It is very relaxing.  We stuck with my plan for the most part except a blast out of the first tunnel and into the wrong end of the second.  Tight turns like that out of tunnels are pretty tough for us, and I'm still trying to find my stride as far as when to call her and where to be.  Anyway!  We pulled it off the second way around those obstacles, so there!  A Q with 36 points! 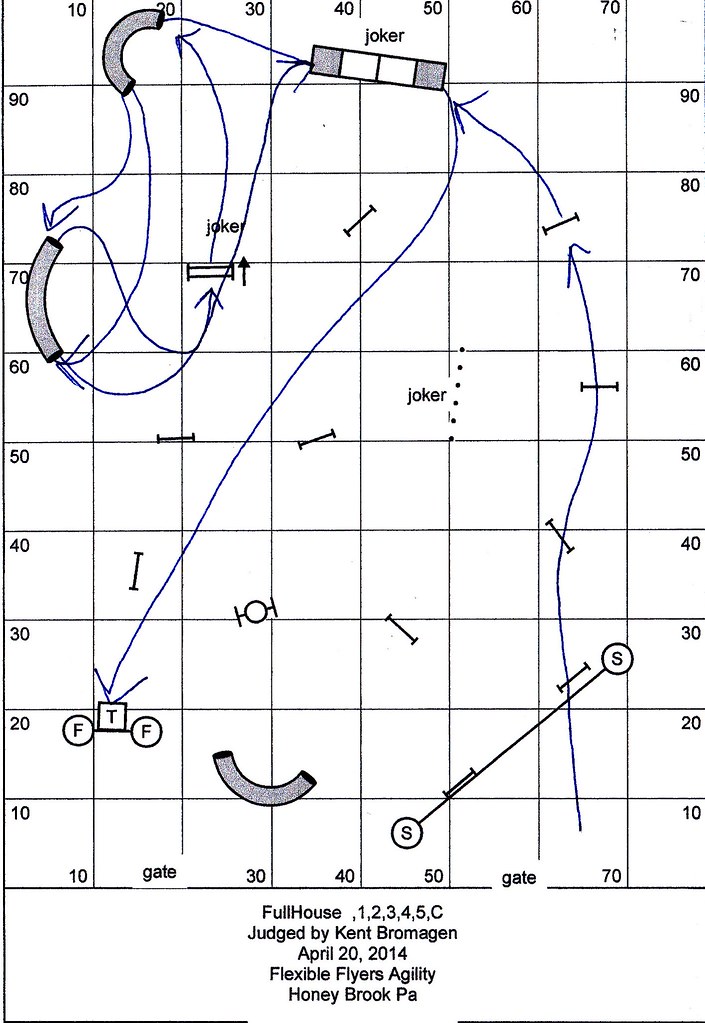 Next another try at Standard Level 4.  I will save the suspense, we NQ'd for blown dog walk and Aframe contact.  Oops!  I actually have this one on video.  The jump sequence at the end, it turns out I had plenty of time for front crosses/blind crosses instead of rear crosses, but I just stuck to my original plan. 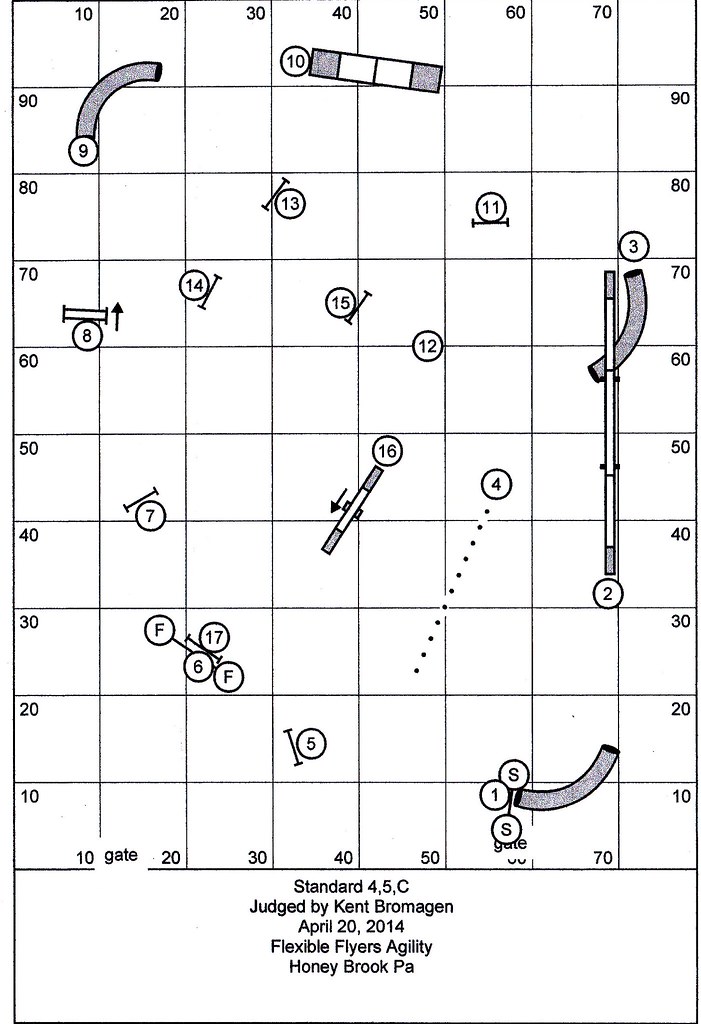 Wildcard Level 4 next.  This NQ, totally on me, I didn't even think about the potential for the off course that ended up happening.  I was originally frustrated with myself for not talking to her in the tunnel soon enough, but with a straight tunnel like that, I really don't think any amount of talking would have been helpful.  What I should have done was rear cross the tunnel as soon as she got into it, and then from the right side of the tunnel called her and gotten her over the third jump.  Another thing to look out for in the future.  With a straight tunnel she can see the "next" obstacle, it's exciting, she wants it.  Her handler is by her side and for Molly...that's a green light!  I can't blame her!  She was a total mess on her weaves, it must have taken me six attempts to get her into them.  Molly!  The other discriminations went well, we did 6A and 8B. 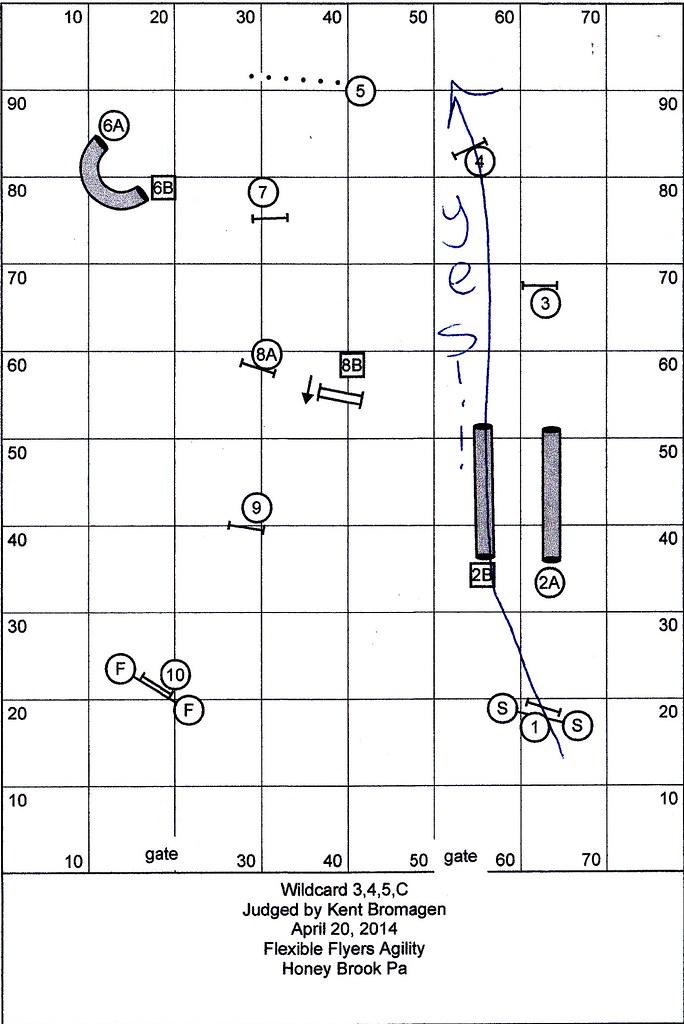 Ended the day with Colors Level 4.  I kinda sorta really wanted a Q so that we wouldn't have "wasted" the rest of the day.  We got it!  We did the "Square" course.  I was really really happy with the opening on this.   I led out past the second jump.  Remembered to arrange my body to allow for her next line (I used to stand too close and she would, understandably, run into me.   I cued her released with my left hand and as she committed to the second jump I switched hands and sent her out to the third jump.  (Keeping myself still and just doing a send and then starting into the next line kept her from the off course tunnel.)  It was beautiful, wish it was on video!  The weaves were again a challenge.  There was an Aframe stored in the corner and Molly thought she had better go sniff that instead of doing her weaves.  In her defense, I didn't really decel properly for a good Molly-entry.  So we got them, we finished the rest of the course, we got our Q.  Yay! 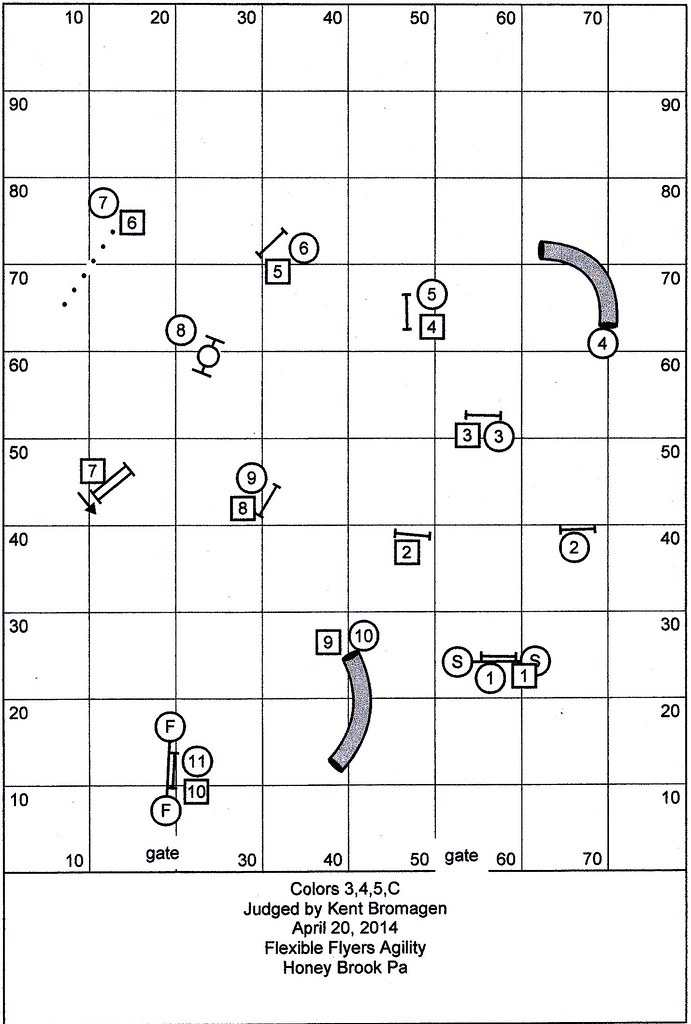 So, some really great stuff this weekend!  4 NQs aside, she was running really well, working with me and doing some cool stuff that we could never have done before.  The contact blowing is depressing and I am starting to re-build value into a target and will probably start using that in training class again.  In class she runs her contacts, all the way to the bottom, all the time.  But that never translates to trials.  She is a "toe in the contact zone" kind of dog as a rule.  I have forced myself to stop the A-frame micromanaging because it stresses her out a lot (I have discussed this.)  I think going back to a stopped contact with a target at the end will help her understand and value the end of the contact equipment with a behavior independent from me.  Sigh.

Her weaves were definitely terrible this weekend.  She has not had her muscle therapy with Michael for three weeks and I do wonder if that is a factor.  She actually sees him today (so does Ein!) and we have a trial this weekend, so I will be on the look out for improvements.  At least she stayed in the weave poles once she got into them this weekend.

Molly's weaves are going to have to improve before we progress much further in AKC.  We are in Open now in both Standard and JWW and we have NQ'd Open 3/4 times due to weave pole releated refusals.  We will see how this and next weekend goes, but if we keep NQ'ing for weave issues...we are going to have to take some time off from AKC.  CPE is a good place to keep working on this particular issue, because refusals are not counted.   If a dog comes out of the poles, that is a weave fault.  But until the dog enters properly, there are no faults given.

And of course.  In class on Monday?  She did the weave poles in three separate courses.  She entered on the first try, she stayed in them, she had some speed.  Stress is definitely a factor.  We just need more experience.
Posted by dogbird daily at 7:28 AM