I have been absolutely negligent about blogging lately.  So much has been going on!  I want to start by following up on what is going on with Ein's health.

I took Ein to visit a veterinary practice that is more specialized in musculoskeletal issues - a rehab vet.  I did not see the actual rehab vet herself, but I did see another vet at the practice who was very knowledgeable.  And that was what I wanted - someone who coul

He looked at Ein's x-rays.  He told me that Ein has arthritic elbows.  Good shoulders.  It goes without saying that the hips are a horror show of arthritis and dysplasia.  I had told him that I was an x-ray tech so he said, "And of course, with the spondylosis..."  Whoah.  Back that up.  Spondylosis?  I honestly had not noticed. 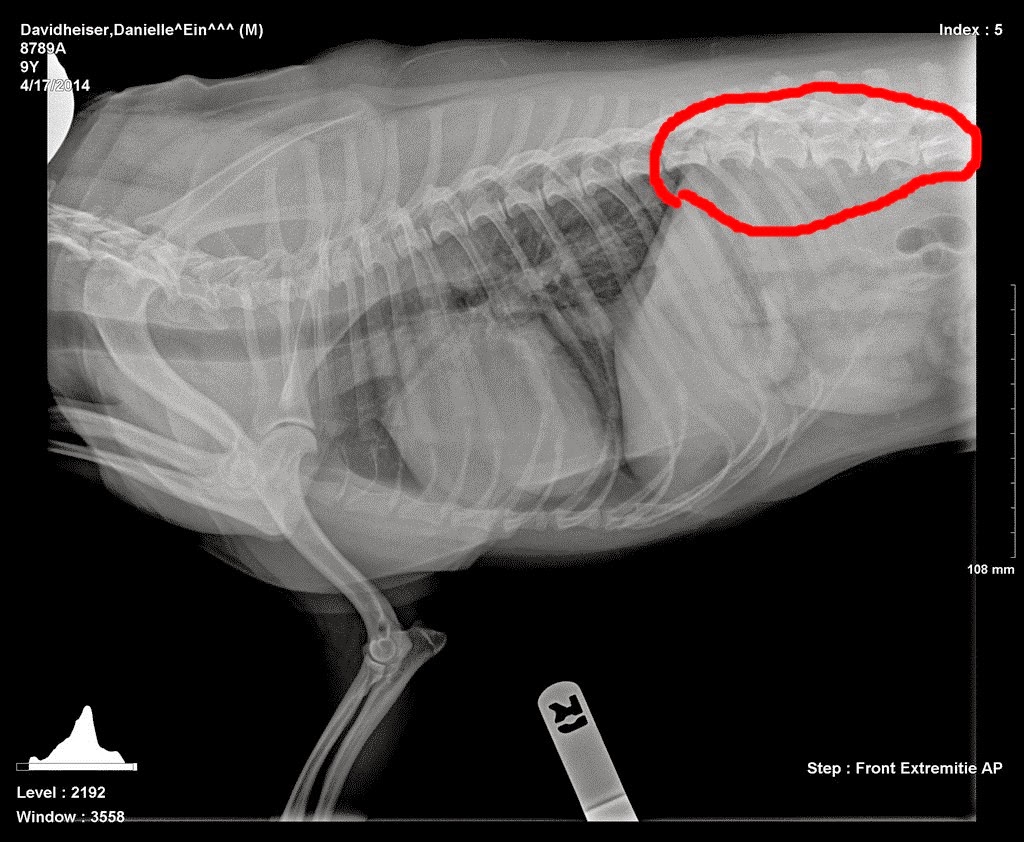 Without going all scientific, spondylosis is a condition of the spine where the vertebrae grow little bone spurs.  The body is trying to do a type of natural spinal fusion, and it is compensating for an instability in structure.  Which Ein certainly has.  As spondylosis progresses, it can pinch the nerves off and interrupt healthy nerve communication.  Functions such as bowel, bladder and rear leg control can be affected as spondylosis progresses.  Scary stuff.  The vet showed me how already Ein's response to having his rear legs "knuckled over" is very limited.  The vet bent Ein's toes into his fist and Ein just stood there and made no effort to put weight on his foot, pull it away or place it back on the floor.  Not great.

The vet and I discussed surgical options.  FHO or Femoral Head Ostectomy, where the femoral head is literally removed and the body creates its own joint - it takes the dysplastic hip and arthritic femoral head entirely out of the picture.   Total Hip Replacement, where Ein would get a new hip entirely.  But I am not interested in surgical options.  Ein is nine years old, it would be costly, and I think that we have plenty of other options on the table available for Ein to live very rich life without surgical correction.

We discussed how Ein has been putting a lot of his weight on the front, for a long time.  This explains why he has foreleg tremors.  We need to get Ein's pain under control and get him off that front end so much.  The vet explained that in time and with no intervention, Ein will likely become bowlegged due to the tremendous strain he will be putting on his elbows.  The muscles in Ein's hips/rear are atrophying.

We started Gabopentin and I was given a bottle of Rimadyl, both for pain.  The vet did mention Science Diet JD, a prescription diet formulated specifically for dogs with joint issues.  I am not a fan of science diet, though, and will not be feeding that to Ein.  The primary ingredient is corn, and Ein would be an itchy, hairy, flaky disaster if I went back to feeding him a corn based diet - no matter what the benefits to his bones.  We discussed glucosamine supplements, we discussed fish oil supplements (Both of those, I am already feeding to Ein.)

I was recommended to make an appointment with the actual rehab vet, which I have yet to do.  (though I was told that she had given Ein's x-rays a glance while the vet that we saw was doing so.)  Accupuncture, cold laser therapy, hydrotherapy.  We have a lot of options.

We learned nothing earth shattering, but I feel a whole lot more grounded.  I feel like I have a plan.  My dog's skeleton is poorly put together, and falling apart.  Nothing can change that.  Moving forward I would like to see the rehab vet, though she is hard to get an appointment with.  I have been faithful with his pain medication and his supplements (although he despises the fish oil capsules.)  When we get the pain under control I would like to start on some rear end strengthening exercises.  The foreleg limp persists and it absolutely crushes me.  I hate seeing this active little dog reduced to a couch potato and excluded from playing fetch and other fun activities (though, I think that I am bothered more than he is.)

We will be participating in a cool opportunity at the end of May, however.  I have recently been working a lot of overnight shifts at my job, and in May more than a few of those overnight shifts leave me with the day off on Friday (I'm supposed to be sleeping, but hey.)  Which has led to a bit of an irrational frenzy of entering AKC shows on those Fridays - oops.  I just can't help myself.  On a Friday at the end of May, there is an AKC trial that is offering "Glory Runs" on Friday only.

These Glory Runs benefit the entrant's choice of either the Golden Retriever Foundation, or the Morris Animal Foundation.  The run will consist of jumps (either with no jump bars or at the handler's choice of jump height), tunnels and a 4" high table at the end.  "This special event is designed to showcase and honor retired and/or disabled agility dogs..."   I am buying Ein an entry for this and I am really excited about it - it is so very timely.  I especially like that I have the option of running Ein through jump standards only, if I do not want him jumping even 4" - it will all depend on how he is feeling.  I feel like he can handle this, I feel like he can enjoy this.
Posted by dogbird daily at 5:38 PM