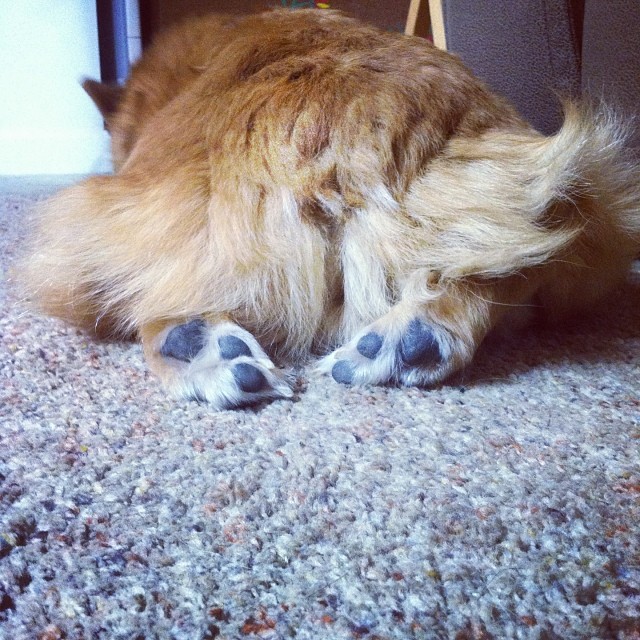 Finding out that Ein has hip dysplasia has been resulted in a cascade of thoughts to the effect of "So that's why..."  The hind end conditioning exercises that I have reviewed (and actually started working on in a conservative manner) are great.  Some of them have also resulted in these lightbulb moments.

Perch work.  I remember in a Rally class two autumns ago, all the other dogs were happy to just walk their forepaws up onto a raised dog bowl.  Just walk right up there.  I thought Ein was scared or anxious.  He would step around the bowl, he would walk towards me with his forepaws on either side.  He would not put his paws up there.  It is only recently that I have had any success with him, by using a frisbee - a much lower object - and even then, he doesn't like to stay on the frisbee.

Why?  Looking over these exercises, it specifically puts strain on the rear legs to do that very thing. (the "Paws Up" exercise.)  And the higher you go, the more strength is required out of the rear end of a dog.  Doing this probably caused Ein to not only focus on offering new behaviors and train, but it also probably hurt him - a little or a lot, the pain was there.

I have started this with Ein, using only a 326 page book.  I am keeping the duration short.  We will build up to longer, we will build up to higher - especially as the supplements help his body to feel better.

Sit-to-Stand (or Down-to-Stand).  The Stand command has been the bane of my rally existence with Ein.  It still is.  We actually NQ'd last September because he was stressed out and absolutely refused to come into a Stand.  In the Veterans course that we did at our most recent Rally trial, you could see in the video that he needed to be cued three times.  Ein has always been a reluctant Stand-er, to the point where I even changed his cue word to "Please" because I felt the cue was poisoned. 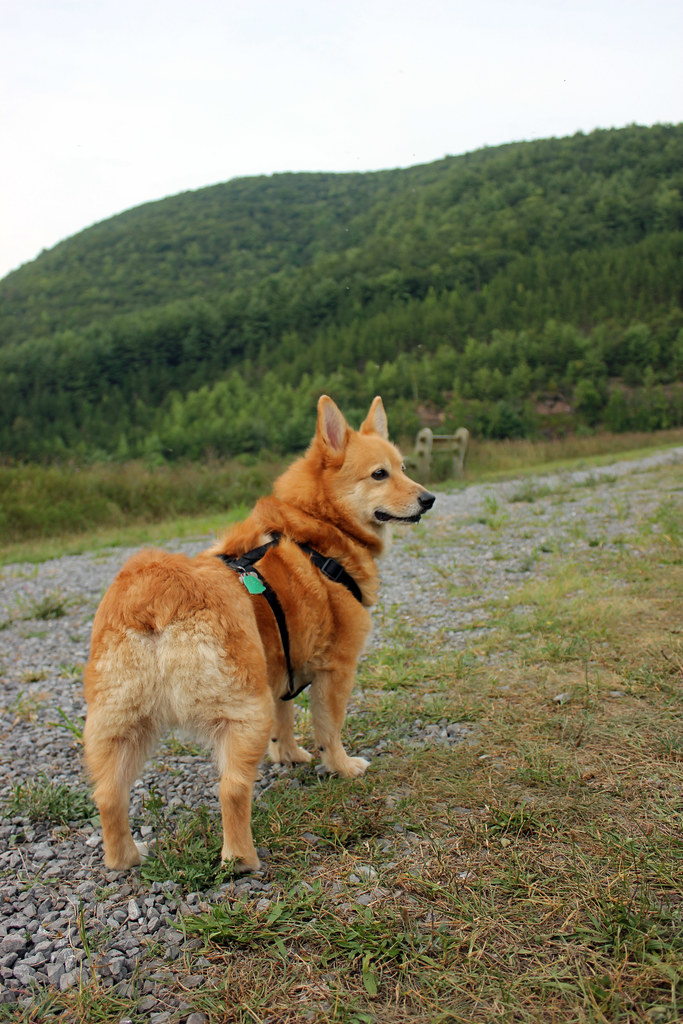 And another puzzle piece.  It hurts him!  To come up into a Stand (whether from a Down or a Sit) he has to power up his entire body using only his poorly put together rear end, with no help from his forelegs.  Not comfortable!  Pair that with anxiety from being at a trial - and the whole thing was probably completely overwhelming for him.

Foreleg Shaking has been something that I have been puzzled by with Ein for a long time.  I already mentioned this particular lightbulb moment but Wow!  Ein has been putting his weight on his front end for so long, I am sure it has caused a strain.  Thinking of how my hands may shake after I have been carrying something really heavy for a long time - that is what Ein has been going through.  I did mention this to more than one vet but it seemed to be more of a mystery for them than anything.

Old Photos.  There is nothing more heartbreaking to me about this whole thing than looking back at old photos and seeing Ein favoring that right rear leg.  And he has been.  And I never even noticed.  I am really sad that I have been so clueless - but in my defense, this little dog has been so active and tenacious that I never even thought to look for structural problems.  Shame on me.

Another of the exercises that we have started working on is the "3 Legged Stand".  Ein does okay with having his right rear leg picked up, to the point where it seems like it's not really that difficult for him.  But it is a strain on him and I know this because when I pick up that left leg?  He has such a hard time putting his weight on the right rear.  It is really really sad, and even though he has his front end for support, he very nearly has to sit down - that right rear leg is so weak.  I don't do a lot of duration at all on this one.  We will keep working on it, though.

I am glad that I now know that Ein has HD.  I know of a few people who think that their dog may have HD, but are reluctant to do the x-rays because there is nothing to be done anyway.  But I disagree with that.  From supplements, to strengthening exercises and treatments to give a dog comfort and quality of life - I think that there is a lot to be done.  I wish that I had known sooner, and perhaps we could have prevented the progression of the spondylosis.  Perhaps not.  But when it comes to HD, I feel like knowing for sure is absolutely the path that I want to be walking.  Knowing about Ein's HD is certainly helping me understand him even more deeply - it helps me understand that some of the things that Ein has been doing or refusing to do, were not entirely rooted in anxiety after all.
Posted by dogbird daily at 7:12 PM